Celebrate National Pizza Month with Some Pizza and Books 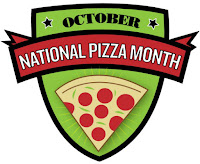 If you are looking for an excuse to enjoy a slice or two of pizza, look no more. October is National Pizza Month and it’s time to celebrate!  Although pizza has been around since 997 AD in southern Italy (a primitive version of today’s masterpiece), it was the returning soldiers who fought in Italy during World War II that brought a hunger for the pie home with them and spurred its popularity in America. Today we should all pause and take a moment to thank Indiana pizzeria owner Gerry Durnall. In an effort to support and promote his growing business, Durnell created the magazine Pizza Today, which ultimately led to National Pizza Month. National Pizza month is enjoyed by pizza lovers across the United States and in much of Canada. There are an estimated 63,000 pizzerias and 94% of Americans eat pizza at least once a month. The figures equal the consumption of about 45 slices of pizza per person in the U.S. each year and that we Americans devour 100 acres of pizza per day, or 350 slices per second—that’s a LOT of Pizza. Thin, thick, or stuffed we just can’t get enough!