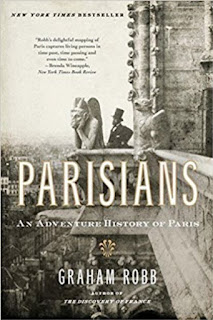 Great cities have large and famous stories. Here, in Birmingham, we have the story of Lou Wooster’s funeral cortege, carriages of the city’s leading families, empty, but in attendance for the brothel madam who had cared for those stricken by a cholera epidemic. We have stories of the courage of the Reverend Shuttlesworth, the civil rights legend, who faced several targeted bombs. We were also scandalized by the unsolved murder of Virginia Simpson, a local, prominent patron of the arts. (Richard North Patterson and Bernard Feld have written historical novels based on this crime.)

Paris is a great city and it has had its share of stories for a very long time. Author Graham Robb opens this collection of Paris’s stories at the Palais Royale, legendary for urban delights of every kind. Invading armies set aside their arms for the promise of complete gratification at the vast Palais Royale. Sex and death are the stuff of urban legends here.

Robb soon introduces us to the architect of the city of the dead, Charles-Axel Guillaumot. Over the millennia Paris had been built with the excellent limestone carved out of mines under Paris itself. During the eighteenth century, the Left Bank began caving into these vast, ancient underground quarries. Guillaumot built a city under Paris to support the streets and structures above. Construction continued through monarchy, the Directorate, the Consulate, the Empire, and the Restoration. This underground city, "the Catacombs," was filled with human bones and skulls when Paris was cleared of many of its cemeteries to make room for the living.

Graham Robb won the prestigious Whitbread prize for his biography Victor Hugo and saved his best Hugo stories for that volume, but in this work he relates the accounts of the very first Metro riders, including Marcel Proust, popping up from Metro stations into distant neighborhoods. Later we find the reclusive Proust eating his ritual meal at the Ritz during the World War One bombardment of Paris, later arriving home with shrapnel in his hat. During World War Two, Hitler tours the monuments of the newly occupied Paris, empty and prostrate. In this account, Hitler was instructing his architects on his dreams of surpassing Paris in his own native capital, Berlin.

Check it out.
By Tressa Fancher