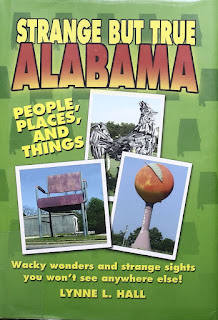 October is a month for all things strange, wacky, and weird . . . and you’ll find all of these in Strange but True Alabama. This is an enjoyable little book, suitable for browsing at random or reading straight through, and it is packed from cover to cover with bizarre and chilling events and personalities from the Heart of Dixie, along with some amusing tales to lighten the mood.
Check out some of the folk remedies:


Bacon fat taped to embedded glass with draw it out. Watch out; you don’t want to lose a finger to that pack of hound dogs following you around, though.

For itching, especially from poison ivy, mix oatmeal into bath water and plunge in. Add a little butter and sugar, and you’ve got breakfast.

Let’s not even talk about what goes into Grandpa’s favorite cold remedy, or “weed tea” for various ailments. But if you had been Ann Hodges, you’d need something stronger than a cold cure for your ills. Hodges is the only human on record to have been struck by a meteorite. There she was on the night of November 30, 1954, listening to the radio in her home in Sylacauga and minding her own business, when an 8 ½ pound meteorite smashed through her roof and landed on her hip, leaving her with severe bruises and the story of a lifetime.

And speaking of meteors, there’s the famous “night the stars fell” on November 12, 1833. The Leonid meteor shower was spectacular that year, inspiring both wonder and panic on the part of Alabamians who witnessed it:


Thousands of stars plummeted to Earth, setting the Alabama sky ablaze, awing many and frightening others who believed Judgment Day was nigh. Across the state, folks repented their wicked ways, renouncing all manner of sin from drinking and smoking to dancing and gambling.

But, of course, Judgment Day did not come, and wicked ways have made a remarkable comeback. The meteor shower became known as “the night stars fell on Alabama” and has been memorialized in song and on our car tags.

Naturally, no book about weird happenings in Alabama would be complete without mention of some of the state’s famous hauntings ranging from ghostly Confederate soldiers in a Notasulga graveyard to a student’s ghost at the University of Montevallo. And how about some noteworthy Alabama creatures? There’s an Alabama Animal Hall of Fame in Montgomery, or you can visit the Bluegrass Farms Wildlife Sanctuary/Tigers for Tomorrow in Attala. You can also take your pick of towns with strange names like Bug Tussle, Scratch Ankle, Slapout, and Smut Eye.

So if you like your weird with a side of amusement and a dash of shiver, try out Strange but True Alabama in your October reading list. Entertainment and exclamations of “Only in Alabama!” guaranteed.

For further information:
"Meteor storm muse behind 'Stars Fell on Alabama'"
Alabama Curiosities: Quirky Characters, Roadside Oddities & Other Offbeat Stuff
"The True Story of History's Only Known Meteorite Victim"
"The 13 Most Bone-Chilling & Haunted Places in Alabama"
"These 30 Alabama Towns Have Some of the Most Bizarre Names Ever"
Alabama Animal Hall of Fame
Tigers for Tomorrow Wildlife Sanctuary
By Tressa Fancher