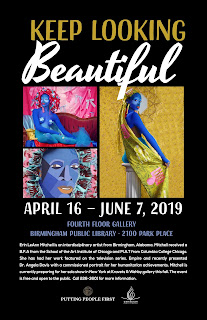 Birmingham artist Erin LeAnn Mitchell's art work has gained worldwide exposure from being featured on the hit Fox television series Empire along with being commissioned to do a portrait of Birmingham activist Dr. Angela Davis.

In an interview with BPL, Mitchell talked about what inspires her work and shares advice for other young artists.

BPL: Describe your artwork style
Mitchell: I'm most inspired by Kerry James Marshall (Birmingham native), Mickalene Thomas, and Jacob Lawrence. I'd say my style is a mix of the three

BPL: How old were you when you decided on art as a career?
Mitchell: 29. Art is all I've ever been invested in but it wasn't until the eve of my 30s that I decided to make a plan, take a leap of faith and use all I'd learned to be a full time artist.

BPL: Describe the excitement of out of all artists out there you were commissioned to do portrait for Dr. Angela Davis that was unveiled Feb. 16 during her event in Birmingham.
Mitchell: I was very honored to be chosen to present Dr. Davis with my work as her award for her humanitarian achievements. My goal upon returning home was to make impactful work specifically for the city of Birmingham and it was very serendipitous that this opportunity presented itself.

BPL: What it was like to meet her at the “A Conversation with Dr. Angela Davis” event?
Mitchell: Up until the Feb 16 event, I had only known of Dr. Davis through history books and photos so it was very surreal to be standing next to such a prominent figure and experiencing her wisdom. It was an empowering moment as a black female artist and native of Birmingham, to show my gratitude to Dr. Davis through my artistic vision and to see it be showcased.

BPL: Any advice for other young artists on how to fulfill their dreams?
Mitchell: Persistence is key. Manifestation is real.

Study your craft, you can always learn more.

Use the Internet wisely: make connections.

Showcase your work even if things aren't perfect, the process is part of the journey and you never know who's watching.
By Roy L. Williams