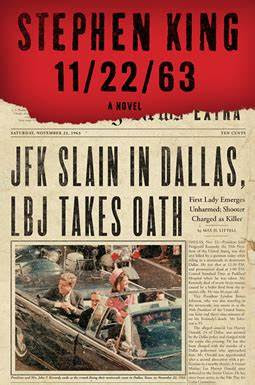 If you could change history, would you do it? And what, exactly, would you do?
Some popular answers are “go back and kill Hitler” or “stop the sinking of the Titanic.” A lot of us right now would probably like to go back and halt the spread of the coronavirus. In 11/22/63 Stephen King tackles an event that resonated with a whole generation: the assassination of President John F. Kennedy. Could it have been prevented, and what would have happened as a result?
High school English teacher Jake Epping discovers that a local diner conceals a time portal that will take you back to one—and only one—time in the past: September 9, 1958. Too late to do anything about World War II or that fatal iceberg in 1912, but early enough to head off one horrible day in Dallas, Texas. And when Jake returns to the present, only two minutes have gone by no matter how long he remained in the past, so he can quickly see the results of any changes he made. He also has the comforting knowledge that after a trip to the past, everything re-sets to the former timeline if you go back again. If you make changes and want them to be permanent, all you have to do is remain in the present.
But Jake finds out the hard way that the past does not want to be changed. Try to interfere and your car won’t start, or if you get it started, a tree will fall in front of it. Or on it. Or on you. Over and over again we see Jake navigating the perilous currents of history, trying to undo evil and do good along the way, returning to now to check the results of his actions and then going back through the portal, waiting it out until 1963 and the most important change he’s trying to make. Can he do it, with history itself fighting him every step of the way? And if he accomplishes his mission, will it change everything for the better?
I love time travel stories and this one pulled me right in: King has the storyteller’s gift that keeps a reader asking “And then what happened?” At over 800 pages this novel is real doorstop but for me it sped by fast enough to break the sound barrier and I didn’t want it to end. As usual, there are sly references to other King stories and a long-time reader of his work will pick up on these, but it won’t interfere with your enjoyment if this is your first King novel. I also liked the restrictions he placed on the time travel idea: only being able to go back to one time, for example, instead of letting someone run loose throughout all history. It brings into sharp focus what you could—or would—do if you could go back to a specific date and make changes. But even the smallest alterations can have far-reaching effects, as Jake discovers. As he closes in on Lee Harvey Oswald and is about to make a huge change to the known timeline, the suspense is gripping and as a child of that era, I was fascinated by King’s speculations on the possible results. They could be wonderful . . . or monstrous. If you’re a fan of time travel fiction, or Stephen King, or both, 11/22/63 is not to be missed.
Other time travel stories you might enjoy:

Time and Again by Jack Finney
Stephen King calls this one “the great time-travel story.”

FromTime to Time by Jack Finney (sequel to Time and Again)

“A Sound of Thunder” by Ray Bradbury (short story)