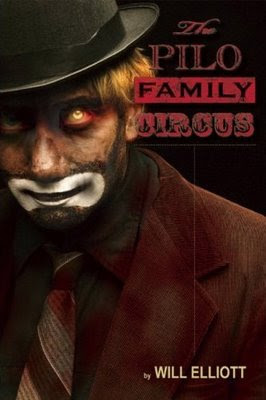 I don't know if I've ever read such an original story chock-full of so much weirdness, violence, and humor. Yes, humor. The Pilo Family Circus was written by a 19-year-old law school dropout from Australia who was diagnosed with schizophrenia. Will Elliott wrote the rough draft in three months, sometimes in sporadic bursts and sometimes in a single sitting resulting in ten thousand words. Pilo was written in times of sleep deprivation, using cabin fever as inspiration, and while he was coming down off anti-psychotic medication. This book is amazing.

One late night an Ordinary Joe named Jamie spies three menacing clowns on the street. One throws a bag of something behind a bush, and when Jamie gets it home he discovers some weird beads in the velvet bag. His ingestion of some of the beads gets him visited by three ruthless clowns who vandalize his apartment and leave him a message informing him he has 30 hours to pass his audition or he forfeits his life.

Jamie passes his audition when me makes the head clown laugh and is whisked away to the Pilo Family Circus. He is now part of a family of clowns led by the brutal and short-tempered Gonko. Once Jamie puts on the clown paint, his alter ego emerges. J.J. the clown is not an Ordinary Joe, but a psycho who enjoys roughing up carny barkers, menacing the dwarves, and getting a thrill out of murdering the gypsies who travel with the circus. Thus begins the battle between Jamie and J.J. over control of their body, not to mention keeping secrets from each other about a revolution at hand by a small group of carnival workers who yearn to break free from the Pilo Family Circus.

The circus is run by Kurt Pilo and his dwarf brother, George. The circus performers include macho but graceful acrobats, evil clowns, and a bitter magician allowed to perform only silly acts like pulling rabbits from hats, which sends him into fits of rage. The freak show is run by Fishboy, and includes Tallow, a thing whose skin melts into rivulets at his feet; a Yeti that is forced to eat glass at every show; and a severed head kept in a glass cage. All freaks were once human, but as punishment by the Pilos were turned into grotesque things by the Master Manipulator.

The circus has been around for centuries, putting on shows for tricks—humans attending a normal circus but who stumbled up to the wrong ticket booth. Sometimes the tricks lose their lives due to unforeseen circumstances, but they are the lucky ones. The others who stumble back into the real world had their souls sucked out of them as wages for the performers.

The most amazing part of this book is finding out how the circus came into existence, and just who is running the show. Oh, and the clowns have been recruited throughout history to return to the normal world and steer the course of human events in violent ways—e.g. influencing a failed Austrian artist with the initials A.H.

The Pilo Family Circus is one of many great bizarro books being published today. If you're a horror fan and want to delve into the truly weird, the world of bizarro fiction might be for you. Bizarro fiction has been described as the equivalent of the cult section at the video store, and some of the names to watch for are Jeremy Shipp, Carlton Mellick III, Anderson Prunty, Mykle Hansen, David Wong, Lance Carbuncle, Rolan Topor, Ryan C. Thomas and, hopefully, many more from Will Elliott.