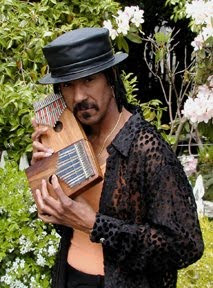 As Mr. Winters charmed the library audience in March of last year, the Birmingham Public Library is excited to host Carl Winters again for February 2010’s edition of BPL@Night.

The ethereal, mysterious kalimba, a.k.a. the African thumb piano, is often misunderstood, misinterpreted, and mistaken for being a museum piece or trinket. Consequently, Carl Winters has been inspired to develop an extensive songbook with the kalimba. His repertoire includes gospel, jazz, blues, rhythm and blues, pop, and original songs while delivering a complete solo performance. He also performs in duo, trio, quartet and quintet configurations.

Mr. Winters attended an Earth, Wind, and Fire concert in the 1970s and became inspired to master the kalimba. He has played all over the United States. The fusion of styles that inform and create Winters’ music will remind the listener of a dream. His songs create a mood and his performances leave a lasting impression on audience members.

“The Kalimba King’s” enriching program includes spoken word as well as music. Audience members will explore the kalimba’s beauty and its power in this special library performance.

Mr. Winters will also perform at the Avondale Regional Library on Tuesday, February 16, 2010.

For more information about Carl Winters and his unique music, visit www.kalimbaking.com.

For information on music, or more broadly, the arts, entertainment, and recreation, please check out BPL’s subject guides dedicated to these topics at http://www.bplonline.org/virtual/subjects/.

This @Night program is made possible by grants from the Alabama State Council on the Arts and the National Endowment for the Arts. would also like to thank the Alabama Power Company Foundation for their generous support of @Night.
By Tressa Fancher

Netagene said…
I saw Carl last year. He isn't just for blacks and teens. I'm a 60+ white lady. He blew me away! And he's so hyper that he made it all fun! I have a kalimba but sure can't play like he does! Go see him! I'll be there again this time, dragging a friend with me!
7:27 PM