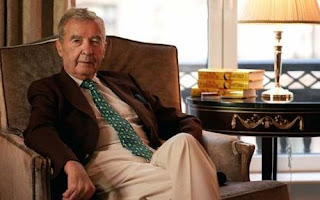 Dick Francis died on February 14 at a home he kept in the Cayman Islands. No cause of death was reported, but he had prostate cancer that was diagnosed in the mid-1990's.

Before he began writing, Mr. Francis was a champion British jockey for the royal family, who was later involved in a horse racing accident. Francis was competing at the Grand National, which is considered to be the world's most prestigious horse racing event, while he was riding Devon Loch, the Queen Mother's horse. For an inexplicable reason, the horse collapsed and could not complete the race. Dick Francis, the British steeplechase jockey, retired from horse racing at age thirty-six.

Mr. Francis became a highly successful crime fiction writer, as well as a popular mystery writer who specialized in an immensely popular genre of mysteries set in the horse racing world. His main characters were often jockeys who were involved in murder and kidnapping plots. He began his second career, in 1962, with the publication of his first novel, Dead Cert. The popularity of his first novel led to his second novel, Nerve. He averaged approximately a thriller a year during his career. Mr. Francis sold over 60 million books during his writing career, including 42 novels.

Francis was awarded Britain's Silver Dagger in 1965 for For Kicks, three "best mystery novel" Edgars for Forfeit in 1969, Whip Hand in 1980, and Come to Grief in 1996. He was awarded the prestigious Grand Master citation from the Mystery Writers of American in 1996. Francis stated in his autobiography, The Sport of Queens, "I still find the writing . . . grindingly hard, and I approach Chapter One each year with deeper foreboding."

His stories were popular with millions of fans. Francis will be missed for his incredible talent and imagination. Survivors include his two sons, Felix and Merrick.