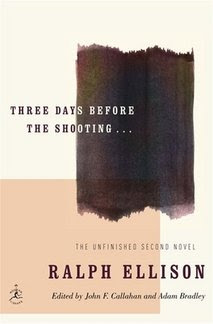 Excerpts from Ralph Ellison's unfinished second novel was edited by his literary executor, John Callahan, and published in 1999 as Juneteenth. Three Days Before the Shooting...the Unfinished Second Novel is the entire manuscript edited by Callahan and co-editor Adam Brantley and published in January 2010.

Ellison started his second novel in 1954 and still hadn't completed it by his death in 1994. He claimed at one point that part of the manuscript was lost in a 1967 fire, but he later told a friend in a letter that it was only revisions to the manuscript that had been lost. Whatever the reasons, the self-confessed "fast writer, but...slow worker"never could pull the novel together.

What it's about: Set in the frame of a deathbed vigil, the story is a gripping multigenerational saga centered on the assassination of the controversial, race-baiting U.S. senator Adam Sunraider, who’s being tended to by “Daddy” Hickman, the elderly black jazz musician turned preacher who raised the orphan Sunraider as a light-skinned black in rural Georgia. Presented in their unexpurgated, provisional state, the narrative sequences form a deeply poetic, moving, and profoundly entertaining book, brimming with humor and tension, composed in Ellison’s magical jazz-inspired prose style and marked by his incomparable ear for vernacular speech. (from Modern Library)

Eight months before his first novel was published, Ellison told a friend he was already starting on his second book so that if his first one was a dud, he'd be too busy to think about it. Invisible Man has been hailed as an American classic and won the National Book Award in 1953.

Links:
BookPage interview with the editors of Three Days Before the Shooting
By Tressa Fancher