Audiobook Month and the Return of Travis McGee 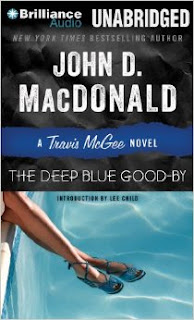 June is the month in which we celebrate audiobooks. Why audiobooks? In this day of tablets, smart phones, etc., they not only let us try new authors and genres, but they also allow us to multitask while doing it. They are also a fun way to revisit old favorites. Speaking of old favorites, where, you ask, does Travis McGee fit into this scenario?

McGee is a fictional character from writer John D. Macdonald. He was featured in at least 21 novels. McGee earns his money by taking on lost property jobs. He only works when he’s low on cash. His residence is also non-traditional, he resides on a houseboat.

Travis McGee was my first introduction to audiobooks. I started listening on my commute to work. The character was instantly addictive. The books were available on cassette. I worked my way through all 21 books, from The Deep Blue Good-By (1964) to Lonely Silver Raid (1985). Like the author Walter Mosley, MacDonald used colors in the titles of his books. Unfortunately, MacDonald died in 1986. Over the years, I forgot about Travis and moved on to other favorites.

Recently in an unexpected move, Brilliance Audio released 18 of the novels on CD. Not only were they on CD, but they were also offered in the MP3 format, which means one CD instead of 16. I’m starting over. Join me and get reacquainted with John D. Macdonald’s most famous character. Reserve your copies today.