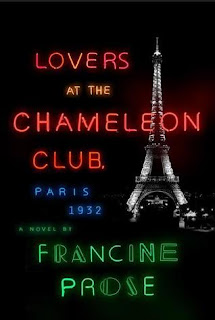 In Lovers at the Chameleon Club, Paris 1932 we spend pleasurable time with three French women as we read their memoirs, diaries, and letters telling tales of glory and terror in the famed artists colony of Montparnasse from the boozy parties of the '20s to the Gestapo’s torture rooms during the occupation. We also read the words of an American ex-patriate writer based on Henry Miller, obsessed with slights and sex, and of a sweet Hungarian photographer, an artist, based on the great Braisson. Pablo Picasso makes a strong cameo appearance, his sketch of a guillotine foreshadowing the horrors ahead.

The Chameleon Club, a left bank transvestite cabaret, is their hangout. Anyone who has spent serious time drinking at a drag club will find Prose’s depiction of the scene to be comfortably familiar. Yvonne, with values inspired by her pet lizard (thus the name), presides over the club singing sadly of her sailor who never returned, selling drinks and frisson to the Americans in the '20s, drinks and bigotry to the French in the '30s, and selling drinks and perversion to the Nazi gangsters.

The mystery of Lou Villar is the narrative thread that drives the novel. We know the basics of her stories right away. She was a cross-dressing lesbian athlete who performed in the Chameleon Club cabaret show and became a torturer for the Gestapo, and she is based on an actual female athlete who, with her girlfriend, appears in a famous Braisson photograph and goes on to torture French resistance fighters for the Gestapo. The author, Prose, has said that she considered writing her story as non-fiction, but thought the theme of how one becomes evil was best treated in a novel. The title of the books is also the title of the fictional photograph. Lesbian Couple at the Monocle is the name of Braisson’s picture.

The characters, our writers, diarists, and correspondents, all develop and evolve over the twenty years covered by the narrative, and clearly have new insights on those times as their writing is often looking back on a passage of their lives from the perspective of the 1990s. And they are indeed fascinating characters, but this book is primarily an up-close portrait of a tragic and world-changing aesthetic epoch.