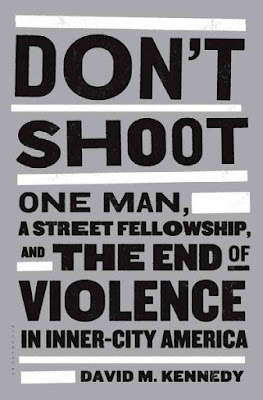 A new reading initiative launched by the Birmingham Public Library (BPL) system can shed light on ways to bring a community together to address violent crime. Birmingham Reads will provide citizens with free copies of the book Don’t Shoot: One Man, a Street Fellowship, and the End of Violence in Inner-City America by David M. Kennedy. Designed as a program where books are distributed, read, and then returned to libraries to be passed on to other readers, Birmingham Reads gets underway on Monday, June 15, 2015. Citizens can ask for copies of the book at the circulation desks of the 19 libraries located in the city limits of Birmingham. Limited quantities are available. Birmingham Reads is an initiative launched to coincide with the city’s new Violence Reduction Plan unveiled on June 2 by Mayor William A. Bell and Police Chief A.C. Roper.

As a department of the city, library staff work to build collections and programs that reflect the immediate needs of Birmingham and its citizens. When new initiatives are launched throughout the city, library workers look at ways to connect programs and services already offered—such as computer training classes, online resources for business development, databases for genealogical research, and so much more. They also look for new, low-cost initiatives that provide an opportunity to build partnerships and to get involved in continuing to make Birmingham a model city for all.

When the Violence Reduction Plan was unveiled, Library Director Angela Fisher Hall was told that the book Don’t Shoot would be a resource used for planning purposes. “After receiving a call from the city’s Director of Public Information, April Odom, my staff and I took a close look at how the library could get involved,” Hall stated. “Our summer reading program theme for children, Every Hero Has A Story, and our ability to launch reading initiatives throughout the city, give us a platform for involvement in this undertaking.” As part of the summer reading program, several library locations will invite police officers and other first responders to speak with participants about their work. With an opportunity to meet these civil servants up close, library workers hope to build better communication and trust among these workers and the young people they serve in their communities. By making the book Don’t Shoot available to adult readers without requiring a library card for check out, BPL staff hope that it gives an expanded audience access to the book. At some time in late August, the library will work with other city departments to host a discussion of the book.
By Tressa Fancher