- June 09, 2015
Here’s my latest in a continuing series of pieces on my favorite movies, the ones I watch again and again. Sometimes I think at six, seven times, I’ll probably never want to see a certain movie again, only to have it calling me two, three years down the line. This staying power is something I value more and more as the years go by and I find few repeat-watchers among the current crop of movies-or even among the vast storehouse of older ones. As always, I’ve put the estimated number of times I’ve seen the title at the end of each entry.

Diner (1982). A movie so good, it almost didn’t get released. Apparently, only a last-minute rave from Pauline Kael in the New Yorker saved this one from extinction and shamed the studio into actually releasing it. (Some zealot privately screened it for Kael.) This is director Barry Levinson’s love letter to his youth in Baltimore. The year is 1959. The Fifties are ending. Women are asking more of men. A group of young guys are stumbling from their adolescence to their early adulthood, not sure of exactly what stage they’re in. Sometimes they are neither fish nor fowl, sometimes they’re fish, sometimes fowl, sometimes fish-fowl—all this makes them interesting to watch. The dialogue is just right and resulted from improvisation or was actually improvised on set. The pain, embarrassment, humiliation, and sheer uncertainty of growing up is all there in vivid detail. But they’ve “still got the diner.” And I do, too. Around 10 times. 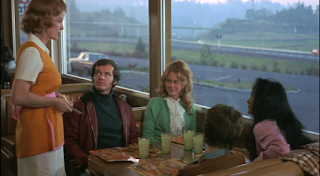 Five Easy Pieces (1970). Speaking of trying to grow up, this one is not so much a coming of age movie as a coming of rage one. One of the movies that made Jack Nicholson a household name, Five Easy Pieces concerns a young man who’s rejected his comfortable upper-middle class background (when you see it you’ll see why), trading it for blue collar life. He soon rejects that, too, and makes stabs at rejoining his cast-off family. Ultimately, that doesn’t work either, and Nicholson’s character finds himself alienated from an America that only offers emptiness, which only heightens his anger. There’s no port in a storm, there’s only storm. Nicholson is something to watch. You never know when he’s going to explode. Even his suppressed rage is dramatic. Karen Black as his albatross girlfriend is a marvel. Fannie Flagg is very effectively blank as a character who can’t do anything more than exist. Themes of America as a purposeless place and rebellion as futility results not in viewer despair but in the viewer getting fully engaged. About 4 times. 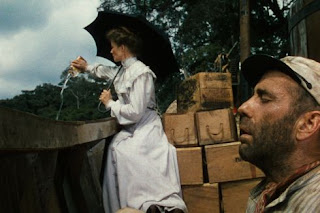 The African Queen (1951). Countless readers of this series will note that John Huston, director, ranks very high in my repeat-watch lists. I’ve covered The Treasure of the Sierra Madre and Prizzi’s Honor before, and The African Queen is similarly bullet-proof for my needs. Humphrey Bogart and Katharine Hepburn star in (and appear in nearly every scene of) this story of a supply boat captain and spinster missionary in WW1 Africa. Two extremely rigid and extremely single adults are, through the extremis of war, brought together and must survive together. They tolerate each other, hate each other, almost die twice, and learn to love each other, realizing a better life despite their own natures. The unimprovable dialogue by James Agee, based on the C.S. Forester novel is one of the great strengths of this film. As Charlie (Bogart) would say, it’s a highly interestin’ song that sings. It’s a road movie where the river is the road, a romance, an adventure story, a war movie…forget all that, an uncategorizable film in the best possible sense, incorporating and transcending genres. The Belgian Congo does for this one what Mexico does for Sierra Madre, toughening it up, making it more realistic, making it such that the geography becomes a lead character. About 10 times.