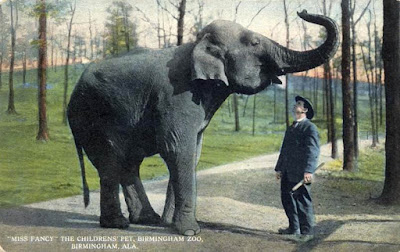 October 12 was a day of celebration in Avondale once upon a time. It was Miss Fancy’s birthday.

Miss Fancy, the legendary Queen of Avondale, may be Avondale’s most famous celebrity. She’s the cover girl for Avondale Brewing Company, where she has a special ale named after her. A restaurant on Fifth Avenue is named Fancy’s on 5th in her honor. A current fundraising campaign is raising money to put a life-size statue of her in Avondale Park.

She is the subject of a subplot in Fannie Flagg’s novel Fried Green Tomatoes at the Whistle Stop Café; a short documentary, Mr. Todd’s Fancy; and Miss Fancy, a play featured in Theatre Downtown’s 2016 season.

Miss Fancy (1871-1954) was a gentle Indian elephant who served as the star attraction at the Birmingham Zoo (when it was located in its original site at Avondale Park) from 1913 to 1934. She was known to routinely stroll through the streets of Avondale, Forest Park, and Woodlawn. Children loved to ride Miss Fancy; she would carry five to seven on her back at a time. She sometimes visited Avondale Elementary School, where the children would run outside to feed her their lunches. She would sometimes wander through the neighborhood eating out of her neighbors’ gardens. One little girl fondly recalled waking up to find Miss Fancy peering in her bedroom window.

And soon a new generation will have the chance to meet Miss Fancy when she stars in a children’s book arriving in January 2019, just in time for Alabama's bicentennial celebrations. The author of Meet Miss Fancy, Irene Latham, will be at Avondale Library on January 13 to introduce the new book, here in the neighborhood that was once Miss Fancy’s stomping grounds.

More information about Meet Miss Fancy is available at https://www.goodreads.com/book/show/29625960-meet-miss-fancy.

Mr. Todd’s Fancy, a short documentary about Miss Fancy and her trainer John Todd, is available on YouTube. Some of the interviews were filmed at Avondale Library.


More information about the campaign to raise money for a statue of Miss Fancy in Avondale Park is available at http://queenofavondale.com/.