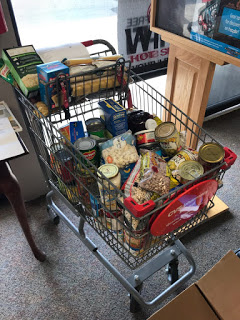 The 2018 Food For Fines campaign at the Birmingham Public Library's 19 locations drew to a close on September 30.

Every September, public libraries across the nation promote the Food for Fines campaign, allowing patrons to give non-perishable food items in lieu of money for overdue fines. The campaign has always been successful at the Eastwood Branch Library, but this year was different.

With the August 1 inception of the automatic renewal feature, many of our patrons avoided incurring the overdue fines they had in the past. As such, our borrowed shopping cart stood empty for a while until some curious patrons asked about its function. Once we told them about the food drive, however, our patrons began demonstrating their generosity by donating food in the absence of overdue fines, and the Eastwood Library was able to help the Eastern Area Christian Ministries stock its food pantry.

Our hearts are considerably warmed by the generosity of our patrons and that speaks volumes (no pun intended).
By Birmingham Public Library