Southern History Book of the Month: Only a Few Bones: A True Account of the Rolling Fork Tragedy and Its Aftermath 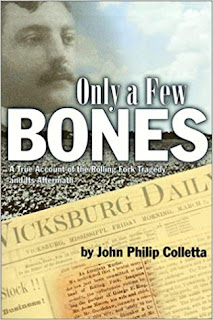 Only a Few Bones: A True Account of the Rolling Fork Tragedy and Its Aftermath
John Philip Colletta

“Sometimes Genealogy Can Be Murder . . .”

This tagline on the back cover of Only a Few Bones sounds like the hook for a series of mystery novels featuring a genealogist detective—and that would be close to the truth. After hearing family legends of the Rolling Fork Tragedy and how one of his ancestors was murdered when his country store burned down, John Colletta spent thirty years trying to determine exactly what happened on the night of March 4, 1873. The result is every bit as compelling as a suspense thriller:


As a boy, all I wanted was to draw a family tree. I never imagine, as I transcribed all the names and dates Grandma dictated . . . that one branch of my ancestry would lead me to this gigantic building collapsing in flame. I never imagined that I would become obsessed with unpuzzling what really happened, and why, and that the only way for me to behold the truth was to tailor anew the ghoulish raiment in its entirety. For that is precisely what I had to do: piece together the historical context of this family story . . . how else could I identify suspects and motives, and evaluate them, and determine who was innocent and who was guilty?

All of this sounds like a daunting task, but the bits and pieces of family lore were enough to set the author on the trail as relentlessly as any Sherlock Holmes, except that this is not fiction—the lure of discovering the facts is the driving force in this account and serves as an example of the surprises that may be in store for anyone researching family history. Most of us have heard these kinds of stories about our forebears—there’s a tale about one of my ancestors and Davy Crockett that I’d love to be able to prove—but few of us would have the patience and determination to dig so deeply in search of the truth or write such an absorbing account of the facts.

I once had the privilege of hearing Dr. Colletta lecture on how he came to write Only a Few Bones. He began his presentation in the morning and made us wait until after lunch before he revealed his findings . . . the truth about what really happened in Rolling Fork that night. There was no need for a nap that afternoon—we were all wide awake!


Still, in the end, it would amaze me how much of what Grandma repeated to me on blind faith turned out to be factual.—But factual in a deceptive way, a smattering of misshapen pieces of the truth, jumbled and insufficient. Stitched together, they would never add up to a whole garment. So Grandma never knew, as I know now, how truly terrible it was.

Only a Few Bones should be required reading for anyone who wants to write a family history; sometimes all we have to go on are fragments of half-remembered accounts that are like scattered bones, but Colletta’s riveting account of his years of research and how he uncovered the real story of the Rolling Fork incident is a prime example of how to do it right—how to assemble the bones into a body of evidence that will bear close scrutiny. If you have a taste for history or genealogy or true crime or all of these together, this account is not to be missed.