Trust Exercise by Susan Choi blends the intellectual rigor of post-modern technique with a story that is timely, mesmerizing, and, in the end, unsettling. The exploration of different character perspectives lays bare the myth-making of the self and the damage that storytelling can do to others. Choi’s virtuoso accomplishment on the sentence level is often extraordinary—and pivots in astonishing and non-traditional directions while conforming to traditional ideas of excellence.

If Sarah M. Broom’s The Yellow House was simply an indictment of state sanctioned terror on the Gulf Coast, it would be a stunning literary achievement. Broom however shows us that such an account without breathtaking rendering of family and environment is, at best, brittle.  The Yellow House uses reportage, oral history, and astute political analysis to seep into the generational crevices, while reveling and revealing the choppy inheritances rooted in one family in the neighborhood of New Orleans East.

Arthur Sze writes with a quiet mastery which generates beautiful, sensuous, inventive, and emotionally rich poems. Sight Lines unfurls like ink in water, circulating through meditations on the natural world; the pleasure and associational depth of eating food; and the profound constitutions of self through memory, human relationships, and experience of the actual world. A keen awareness arises of structural, environmental, and social threats in the midst of this expansive beauty.

At the end of his life, Baron Wenckheim returns to a small town in Hungary, in search of his lost love. From this, László Krasznahorkai forges a fictional universe populated with rogues and visionaries, at once epic and intimate, apocalyptic and deeply comic. Ottilie Mulzet’s remarkable translation captures the density of his extended sentences, their many twists and pivots, and the slow accumulation of their extraordinary intellectual and moral force. Singular and uncompromising, Baron Wenckheim’s Homecoming is a masterpiece by one of the great writers of our time. 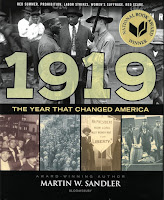 Martin W. Sandler’s riveting work of nonfiction, 1919 The Year That Changed America, focuses on one year of turbulence and its far-reaching aftermath. Sandler’s evocative language brings 1919 to life for young readers, showing us the impact of that crucial year on major issues like race relations, women’s rights, and climate change. This carefully researched and curated work strikingly demonstrates the interconnected nature of history–as it happens and its rippling consequences for years to come.
By G. Jones