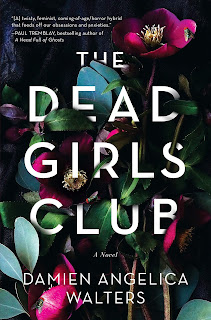 The Dead Girls Club by Damien Angelica Walters is a twist on the classic story told by an unreliable narrator, and I think the author spun it with great success. From the beginning, I can see that the reader might be inclined to question the judgment of Heather, a psychologist who claims she murdered her best friend, Becca, when they were teenagers. Heather has grown up and hidden her secret past from everyone she loves, until it comes back to haunt her in the form of the necklace Becca was wearing when she died. Who could have sent Heather this necklace? Has her well-guarded secret been discovered?

When the author takes us back to the time surrounding the event, we learn that Becca and Heather were part of a “Dead Girls Club” in which macabre stories of true crime and lore were shared—stories that include the legend of the Red Lady, a witch who began haunting the girls of the club following a ritual in which they called her spirit. Could it be that the Red Lady killed Becca? As I watched Heather grow progressively unstable, I also followed the unexpected twists and turns that led to a satisfying conclusion.
By Tressa Fancher