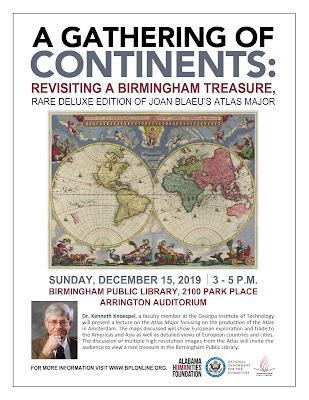 On December 1, 1964, the Birmingham Public Library received one of the rarest and most beautiful atlases ever created. The 11-volume atlas, known as the Atlas Major, was published in 1662 in Amsterdam by noted cartographer Joan Blaeu. Sold at Sotheby’s for an undisclosed amount, the Atlas Major was purchased for the library by businessman and map collector Rucker Agee. The library is celebrating the 55th anniversary of our acquiring this unique piece of cartographic history by offering a free lecture on the history and significance of this treasure.

Dr. Kenneth Knoespel, a faculty member at the Georgia Institute of Technology, will present a lecture on the Atlas Major focusing on the production of the Atlas in Amsterdam. The maps discussed will show European exploration and trade to the Americas and Asia, as well as detailed views of European countries and cities. The discussion of multiple high resolution images from the Atlas will invite the audience to view a rare treasure in the Birmingham Public Library.

This lecture is made possible by a grant from the Alabama Humanities Foundation.
By Tressa Fancher