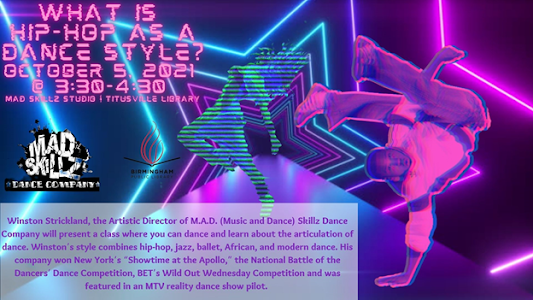 By Reba Williams, Branch Manager| Titusville Library
Have you ever wondered what hip-hop dance looks like? Would you like for someone to teach you a move or two?

The style of hip-hop dance, like hip-hop itself, is sometimes a bit hard to define. Lots of styles have developed in and around the genre, and many people have very strong opinions on what is and isn’t a part of the accepted canon.

Strickland will present a class where we can dance and learn about the articulation of dance in a fun, friendly environment. The class is open to both novices and accomplished dancers.

Strickland, who has led hip-hop classes for several years during the Birmingham Public Library Summer Learning programs, is an accomplished dancer who has performed across the nation. He is also an actor who has graced the stage in local theatres and national venues in such productions as Annie, The Wiz and "God's Trombone.

Strickland has performed with Umdabu South African Dance Co. and as a back-up dancer for such platinum recording artists as Outkast, Mary J. Blige and Keith Sweat. He has also produced a television show for 95.7 Street Jamz and production for his M.A.D. Skillz Dance Co.

Strickland has been recognized by the National Library of Congress, and been featured in Who's Who in Black Birmingham and Birmingham magazine.
By Roy L. Williams