Women in Space: Women of Many Firsts

World Space Week 2021 is celebrating "Women in Space," and the Birmingham Public Library (BPL) is, too!

Although Nichelle Nichols known for going to space in the Star Trek series, her role was a huge influence on real-life space travel for many women.

Perdeta Long, a Library Assistant III at Southside Library, wrote these brief biographies on some of the most influential women in space.

Nichelle Nichols (born Grace Dell Nichols on December 28, 1932) is an American actress, singer, and voice artist best known for her portrayal of Nyota Uhura in Star Trek: The Original Series and its film sequels.

Nichols' portrayal of Uhura was ground-breaking for African American female characters on American television. She was one of the first black women featured in a major television series.

Yet during the first year of the series, she turned in her resignation. One of her fans, Dr. Martin Luther King, Jr., convinced her to stay on the show.

In her role as Lieutenant Uhura, Nichols kissed white actor William Shatner as Captain James T. Kirk on November 22, 1968.The episode is cited as the first example of an interracial kiss on scripted U.S. television.

From 1977 to 2015, Nichols volunteered her time to promoting NASA's programs. She wanted to recruit more diverse astronauts, including women and ethnic minorities.

Her efforts brought Dr. Sally Ride to NASA (more on her later in the blog).

Other people recruited by Nichols includes:


Nichols' work with NASA is closely covered in the documentary on her life, Woman in Motion. 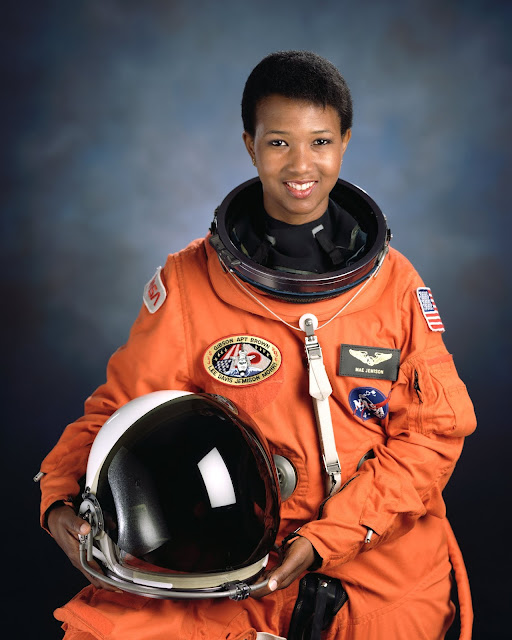 Photo of Dr. Mae Jemison from NASA
Dr. Mae Carol Jemison, born in Decatur Alabama on October 17, 1956, was raised in Chicago. She is an American engineer, physician, and former NASA astronaut.

Jemison graduated from Stanford University with degrees in chemical engineering as well as African and African-American studies. She earned a medical degree from Cornell University and was a doctor for the Peace Corps from 1983 until 1985.

Jemison worked as a general practitioner while pursuing her dreams at NASA.

Jemison joined NASA's astronaut corps in 1987 and was selected to serve for the STS-47 mission—her only space mission.

Jemison became the first African American woman to travel into space when she served as a mission specialist aboard the Space Shuttle Endeavour, a cooperative mission between the United States and Japan.

Jemison received many honors and awards throughout the years, including Jemison on a 1996 Azerbaijan postage stamp. She was voted 1993 People magazine's "50 Most Beautiful People in the World” and in 2004 inducted into the International Space Hall of Fame.

Jemison resigned from NASA in March 1993 with the intention of starting her own company. 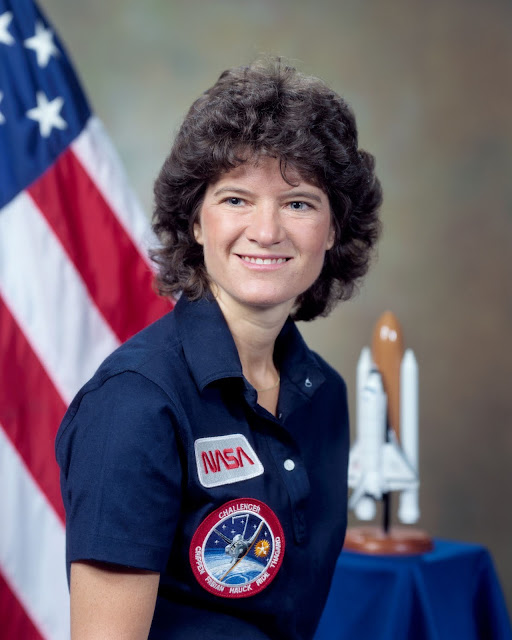 Photo of Dr. Sally Ride from NASA
Sally Kristen Ride was born May 26, 1951, in Los Angeles and was an American astronaut and physicist.

She joined NASA in 1978 and became the first American woman in space in 1983. Ride was the third woman in space overall and remains the youngest American astronaut to travel to space, achieving such a feat at the age of 32.

After flying twice on the Orbiter Challenger, she left NASA in 1987.

Ride worked for two years at Stanford University's Center for International Security and Arms Control, then at the University of California, San Diego, researching nonlinear optics and Thomson scattering.

She served on committees that investigated the Challenger and Columbia Space Shuttle disasters—the only person to participate in both.

Ride is recognized as the earliest LGBTQ+ space traveler.

In 2001, she founded Sally Ride Science, a company she co-founded with her life partner, Tam O’Shaughnessy, to inspire other young women to pursue STEM careers.

The powerful influence of Star Trek

From 1977 to 2015, Nichelle Nichols began a volunteer affiliation between NASA and a company she helped run called Women in Motion, Inc.

If the examples above did not make it obvious, the program was a success.

Goldberg asked for a role on Star Trek: The Next Generation, and the character Guinan was specially created for her. Mae Jemison even had a guest appearance on an episode of the series.

Besides intelligent and beautiful, these three women were driven to not only succeed, but to excel in their endeavors. We are so much richer because of them.

Learn more about these women and space at the BPL and fellow Jefferson County Library Cooperative members.
By Cheyenne Trujillo