Bid on Fine-Dining Options at A Novel Tasting Silent Auction 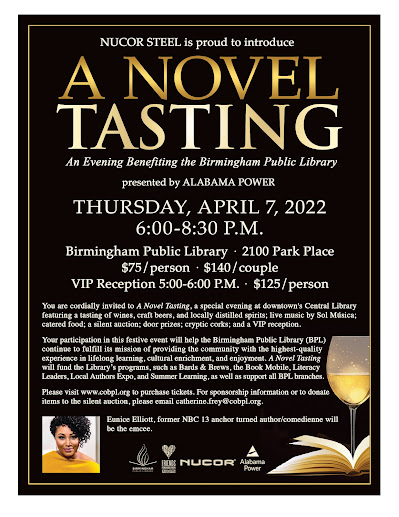 Birmingham, Ala. - Do you love succulent seafood or maybe a delectable filet mignon? What about indulging your palate in some of metro Birmingham's most elegant and renowned restaurants?

Then make plans now to join us at the Central Library downtown on Thursday, April 7, 2022, for A Novel Tasting, a special evening benefiting the Birmingham Public Library.

BPL's first annual “A Novel Tasting” fundraiser will feature a tasting of wine, craft beers, and locally distilled spirits. This special event will kick off with a VIP reception starting at 5:00 p.m., followed by the tasting from 6:00 to 8:30 p.m. Attendees can enjoy networking while dining on delicious food catered by Kim, and enjoy live music by Sol Música.

In addition to several other exciting items, our silent auction will feature many of Birmingham's finest dining experiences, including:

* The Bright Star, 304 19th Street North in Bessemer, a Greek-style family restaurant founded in 1907 and recognized nationally as one of America's best historic restaurants.

* Gianmarco's, 721 Broadway Street in Homewood. Founded in February 2003, Gianmarco's is a family-owned Italian cuisine restaurant operated by Giovanni, Giani and Marco Respinto, a team of father and sons.

* Ocean, an award-winning seafood restaurant located at 1218 20th Street South in Birmingham's Five Points South. Opened by George Reis in 2002, Ocean is one of the metro area's most recognized restaurants and has won several national honors for its seafood cuisine including Best Chef and Best Restaurant.

* Perry's Steakhouse & Grille,  located at #4 Perimeter Park South just off U.S. 280. Perry's is one of the country's premier award-winning steakhouses.