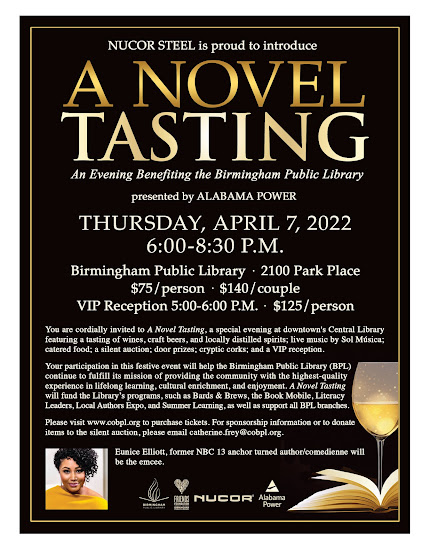 Name: Eunice Elliott
Hometown: Bessemer, Ala.
College: University of Alabama, majored in Journalism/Theatre
Bio: Eunice Elliott is best known for her spending several years as a former lead news anchor on NBC’s Birmingham affiliate WVTM-NBC 13 until resigning in March 2020 to focus on writing books public speaking and being a comedienne full time. Eunice has performed comedy for 14 years. Prior to joining NBC 13, Eunice worked in sports and entertainment, including stints at ESPN in Connecticut, the Tennessee Titans NFL team, the FedEx Orange Bowl Committee.
She also ran her own public relations firm for many years, representing professional athletes. In addition to writing books and performing, Eunice works with Birmingham Promise helping, helping high school seniors attend college.
About her books: Eunice has written three books, “So Much Love to Give” and "Being Different is Fun", (children’s book series) and “10 Things Your Mama Never Told You, But Mine Did...Unconventional Wisdom to Navigate a World That Cares Nothing About You or Your Feelings” which can be found on her website, euniceelliott.com and Amazon.
Upcoming comic shows or book events: Follow her social media @euniceelliott to find out where she will be next.
Birmingham, Ala. - Attendees of the Birmingham Public Library’s April 7 fundraiser, “A Novel Tasting,” will be very familiar with the event host, Eunice Elliott. She is a popular former television anchor of WVTM NBC-13 in Birmingham and a longtime comedienne who has performed at The Comedy Club in Hoover and other venues across the Southeast.
As a comic, Eunice Elliott knows the importance of timing and delivery when telling a joke. Eunice's humor helped her deal with bad timing when she chose to quit her job as lead anchor of WVTM’s morning news to pursue book writing and comedy full time in March 2020, not knowing there was a global pandemic awaiting. Yet Eunice adapted to a virtual world, publishing three books over the past two years (including launching the “Sugar & Bella” children’s book series about her beloved two dogs).
Check out this national television interview Eunice did last September.
Eunice is proud to pursue her passion to use her voice and creative, unique perspective on life to encourage, inspire, and entertain others. Even in a virtual world over the past two years, Eunice has continued to be a sought after speaker. When not writing books and performing, Eunice works with Birmingham Promise, a program started by Mayor Randall Woodfin to help Birmingham City Schools graduates attend college.
On Thursday, April 7, the Birmingham Public Library will host its premier “A Novel Tasting” fundraising event. This special evening from 6:00 to 8:30 p.m. in the Central Library will feature a tasting of wines, craft beers, and locally distilled spirits; catered food; live music; a silent auction; door prizes; “cryptic corks;” and a special VIP reception.
"A Novel Tasting" will fund the Library’s programs, including Bards & Brews, the Book Mobile, Literacy Leaders, the Local Authors Expo, and Summer Learning, as well as support all BPL branches.
In a Q&A interview, Eunice Elliott talked about her books and comedy career, and former career as a journalist.
BPL: Many Birmingham viewers know you from the time you spent as a morning anchor at WVTM NBC 13. But are not aware of your books and comedy career.
Eunice: I've been doing comedy for almost 14 years now. I was doing comedy long before I was doing the news, that's how Channel 13 heard of me. I do have a journalism degree from Alabama, I just never pursued it as a career...it pursued me!
BPL: You left TV to release your books and do comedy two years ago right when the COVID-19 pandemic began. What was it like publishing books and doing comedy amidst a pandemic?
Eunice: I definitely had to get creative. But more people were online, so I sold more books online. I've done a few drive-by book signings at local businesses and now I sell them in-person at author expos and after my comedy shows!
BPL: I am excited that a published author (you) will emcee our A Novel Tasting library fundraiser. What inspired you to write your books?
Eunice: I've always enjoyed reading and found that through my own life I enjoyed telling stories as well. I was inspired to write books in order to share my stories with people I may never have the pleasure of actually meeting.
BPL: Who is your favorite author and why?
Eunice: I have several favorite authors honestly. I remember reading Maya Angelou's "I Know Why The Caged Bird Sings" and becoming transformed in my thinking as a young girl that I could be any and everything I could ever dream of. I hope to offer readers of my books that same permission in their own lives.
BPL: Advice for new authors or those desiring to write a book?
Eunice: Just write the book! Stop talking about it. Just do it. Everyone has a voice and a story to share. Don't shrink. Take up all your space in the world and share your gifts.
BPL: A Novel Tasting will feature a tasting of craft beers, wine, and spirits. What is your favorite drink and why?
Eunice: I prefer vodka over wine and am learning to love tequila! if it is wine, i lean towards sweet white wine.
BPL: Final message for A Novel Tasting attendees?
Eunice: Trust your unique journey and the timing of it. It all happens when as it should even it it's not when/how you had hoped or planned.
By Roy L. Williams