Book Review: Planet of the Apes 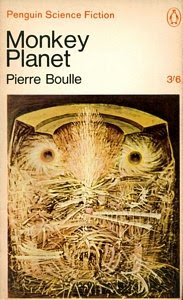 Planet Of The Apes
By Pierre Boulle

When I was a kid in the Sixties, my dad had a copy of a book called Monkey Planet on his bookshelf. I was intrigued by the title. I was old enough to realize it was a made-up story but I knew almost nothing about it. Many years later it was made into the movie Planet of the Apes (1968), which referenced the more-common name of the novel. I liked the movie and have seen it several times over the years. Some (well, more than some) of it is silly, dated, and embarrassing, but it still tells a great action story, and the soundtrack is astonishing. Recently, I read that the novel is more serious than the movie. That caught my attention, so I started reading it and discovered that the serious bit is only one of many differences between the book and film. And its seriousness is tripped up by flaws anyway. Two aliens discover a message in a bottle. It’s the story of an Earthman, Ulysse Merou, who travels to Soror, the titular Planet of the Apes. The apes-not monkeys learn French (Boulle was French) from Merou, who in turn learns the simian language. Soror isn’t Earth, but it is Earthlike, sometimes clumsily so—did the ape annals really have to have Impressionists?

The apes are the dominant species, and they have our human level of intelligence and the native humans run wild as beasts when they’re not being experimented on by the apes. Boulle isn’t a great (or even a very good) stylist, but he tells a corker of a story and handles the social, religious, scientific, and philosophical aspects of Soror in a mostly entrancing way. He means to make the reader uncomfortable, too, and the way the apes treat humans will at least make you look at PETA in a new way. The apes tell Merou that their races (chimpanzees, gorillas and orangutans) are equal but our narrator quickly cottons onto the face-saving nature of the claim. The apes’ textbooks state that the planet Soror is the center of the universe, though the educated have long since discarded this belief (I couldn’t help but think of the evolution-averse statement inserted into Alabama state textbooks and what an embarrassment that is to the equivalent here.) There are many funhouse parallels in Planet of the Apes and they are enjoyable when they aren’t disturbing, which is to say that they’re usually intriguing. At his best, Boulle is in the Swiftian line, and he can be merciless.

On another front, the early-Sixties (1963) nature of the book is doubly odd. The apes have just put up satellites, and a man, into space. They see all non-ape creatures as incapable of thought, the way almost all Earth scientists saw animals back then. (One of the questions the book raises is, What is an animal, anyway?) Subplots with rich sexual potential end up chaste after all—and the author was French! There are none of the humanlike bonobos, which science knew little of at the time of the novel. In some ways, the book’s future is our past.

So check out this book already. The misfires don’t ultimately matter too much and the hits are deep and wide. It’s a compelling read with a considerable ironic underbelly. While reading, you never quite forget the precariousness of man on Soror or Earth, or man as narrator or beast.

As for my dad? I never read that, he told me the other day.