Today's Black History Spotlight is on the late Dr. A.G. Gaston, who amassed a business empire worth over $40 million by the time of his death at age 103 in 1992 and was named by Black Enterprise as the Black Entrepreneur of the 20th Century.
The Birmingham Public Library has several books on Gaston, including Black Titan: The Making of a Black American Millionaire, (by Carol Jenkins and Elizabeth Gardner Hines), The A.G. Gaston Motel in Birmingham: A Civil Rights Landmark by Marie A. Sutton and  Gaston's memoir Green Power.
Gaston's business principles, which include "Find a Need and Fill It," are the subject of the annual A.G. Gaston Conference, founded in 2004 by Bob Dickerson of the Birmingham Business Resource Center and Gaynell Adams Jackson of Advanced Planning Services.  The 2021 A.G. Gaston Conference began Tuesday, February 23 and concludes Wednesday, February 24. Due to the pandemic, it is being held virtually. The conference is free but advanced registration is required. To register, go to www.aggastonconference.biz. 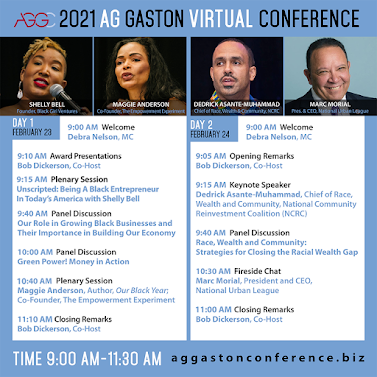 Below is a synopsis of the first day of the 2021 A.G. Gaston Conference, held Tuesday, February 23.
9:15 a.m.  Plenary Session: Unscripted: Being a Black Entrepreneur in Today's America with Shelly Bell
Named one of the Top 100 Power Women by Entrepreneur Magazine, Shelly Bell is a serial entrepreneur who has built a reputation advising other black women on how to build successful businesses. She kicked off the 2021 A.G. Gaston Conference sharing tips and information about Black Girl Ventures, a company she created to help raise money for small businesses owned by black women.
Bell's Black Girl Ventures has 12 chapters across the country, including a chapter started in Birmingham  over a year ago.
9:40 a.m. Our Role in Growing Black Businesses and Their Importance in Building Our Economy
Bob Dickerson served as moderator of a panel that consisted of Dr. Anthony Hood, executive vice president and chief diversity, equity and inclusion officer for Memphis-based First Horizon Bank; Shelly Bell of Black Girl Ventures; and John Hilliard, Birmingham City Councilor District 9 and head of its economic development committee.
Dr. Hood said the racial injustice movement of 2020 showed the power of the African-American consumer market. Blacks have a combined spending power of over $1.4 trillion, he said.
"By the year 2045, minorities will make up a majority of the U.S. population," Dr. Hood said. "Of Americans 16 and younger, over half identify as people of color. For those companies that want to be successful this is a consumer market you can't afford to ignore."
Dr. Hood, who had worked at UAB for 11 years prior to joining First Horizon Bank in November 2020, served as an associate professor of management and Director of the Office of Civic Innovation in the office of the UAB President. He is known as a strong advocate of Black businesses, and won the 2020  A.G. Gaston Award for his innovative approach to providing quality educational opportunities for students.
Hilliard said the power of the collective Black community was shown during the November 2020 U.S. Presidential Election, when a strong turnout by Black voters led to victory by Democrat Joe Biden and Vice President Kamala Harris, the nation's first Black and Asian VP. "We have shown the power of our buying power when we spend our dollars wisely and support each other," Hilliard said.
Other sessions held Tuesday included a 10 a.m. Panel Discussion Green Power: Money in Action, and a 10:40 a.m. Plenary Session featuring Maggie Anderson, Author Our Black Year, Co-Founder of The Empowerment Experiment. Anderson gained national attention over a decade ago when her family bought products and services from black owned businesses only for a full year, which she called the Empowerment Experiment to showcase the power of the black dollar.
The 2021 A.G. Gaston Conference concludes on Wednesday, February 24. Events kick off shortly after 9:00 a.m. with opening remarks by Dickerson, followed a 9:15 a.m. keynote address by Dedrick Asante-Muhammad, chief of Race, Wealth and Community of the National Community Reinvestment Coalition (NCRC).
Other sessions include a panel discussion on Race, Wealth and Community: Strategies for Closing the Racial Wealth Gap and a fireside chat with Marc Morial, president and CEO of the National Urban League, who last fall released its 2020 State of Black America report that examined how the COVID-19 pandemic and spotlight on racial injustice in the wake of the George Floyd killing exposed lingering racial disparities in the U.S.
By Roy L. Williams