The Big Read is Coming to Alabama 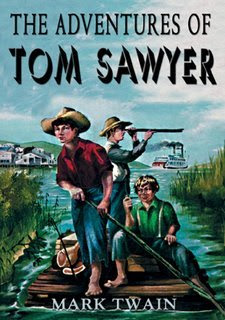 The Big Read is an initiative of the National Endowment for the Arts (NEA) in partnership with the Institute of Museum and Library Services designed to revitalize the role of literature in American culture and bring the transformative power of literature into the lives of its citizens. The Big Read brings together partners across the country to encourage citizens to read for pleasure and enlightenment. To learn more about The Big Read, please visit the www.NEABigRead.org.

Nine regions, or 213 public libraries, in Alabama received grants to implement the state’s first Big Read project. The title selected for The Big Read: Alabama Reads is The Adventures of Tom Sawyer by Mark Twain. This project coincides with the Alabama Year of the Small Town activities through the Alabama Tourism Department. Other partners include the Alabama Public Library Service and the Alabama Center for the Book.

The Alabama Statewide Committee selected The Adventures of Tom Sawyer by Mark Twain for the first statewide Big Read because it is a title that everyone has at least heard about, if not read. Also, it is on many school reading lists with appeal for all ages. And for those who have already read it we encourage them to “Read It Again!” It has a small town theme that will appeal too many of the people in Alabama which makes it a perfect match for the Alabama Tourism initiative for the 2010 Year of the Alabama Small Town and Downtown. Finally, it is a title that has not been selected by an Alabama library for The Big Read program before. Several libraries around the state have implemented Big Read programs since it’s inception in 2006.

The nine regions of Alabama will receive Big Read grants ranging from $2,500 to $20,000 to promote and carry out community-based programs. Participating communities also receive high-quality, free-of-charge educational materials to supplement each title. Reader’s Guides include features such as author biographies, historical context for the book, and discussion questions. Teacher’s Guides are developed with National Council of Teachers of English and State Language Arts standards in mind and include lesson plans, essay topics, and classroom handouts. The Big Read Audio Guides feature readings from the novel along with commentary from renowned artists, educators, and public figures.

Each community’s Big Read includes a kick-off event to launch the program; activities devoted specifically to The Adventures of Tom Sawyer by Mark Twain (e.g., panel discussions, lectures, public readings); events using the selection as a point of departure (e.g., film screenings, theatrical readings, exhibits); and book discussions in diverse locations aimed at a wide range of audiences. Local communities should contact their local library for programs planned during February–April 2010.
By Tressa Fancher