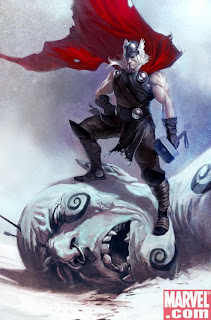 For those not familiar with the Son of Odin, Thor is Marvel Comics’ answer to DC’s Superman – except that where Superman is an alien immigrant who stands for truth, justice, and the American way, Thor is a full-on Viking thunder god with all the arrogance, wrath, bombast, and lust for adventure that implies. Thor has never achieved the same pop-culture status as Superman or Spider-Man, but with a big-budget film currently in production (to be directed by Shakespearean legend Kenneth Branagh, no less) that may shortly change.

In the original Marvel series, Thor had been exiled to Earth and forced to live as a human in order to learn humility. Ages of Thunder tells a story set before that time, when Thor was defender of the mythical realm of Asgard and hadn’t yet learned such mortal traits as patience and compassion. The story begins with a battle between the Lords of Asgard and their eternal enemies, the Frost Giants. The giants are defeated, but Asgard is never without threat from those who live outside its walls, and sometimes from those within. Again and again Thor is called upon to defend his home until the strain of continually cleaning up Asgard’s messes becomes too much for him to bear and he turns his wrath against his own people.

Thor is a character who, in his near-50 years at Marvel Comics, has been written very, very well or very, very badly (but rarely in-between). In Ages of Thunder, rising star Matt Fraction gives us a Thor who isn’t a super-hero but a valiant and flawed creature of myth. Likewise, artist Patrick Zircher evokes the epic sweep of a Norse saga in a style that calls to mind The Lord of the Rings. Included as a bonus in this volume is a story that serves as a jam-session for four noted comic book artists to present their own interpretations of the Thunder God.
By Jared Millet