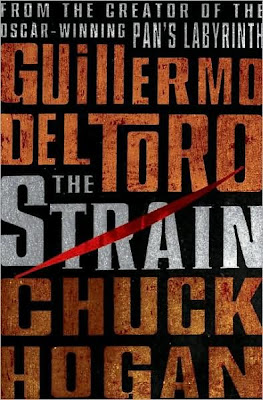 If you don't know who Guillermo del Toro is, he is the genius Mexican-born director and producer of Pan's Labyrinth, The Orphanage, Mimic, Blade II, and the Hellboy movies, and he has been tapped to direct the eagerly awaited adaptation of The Hobbit.

Works in production and development include Stephen King' s Bag of Bones, a remake of the cheesy 1973 movie Don't Be Afraid of the Dark, Hater, Frankenstein, Dr. Jekyll and Mr. Hyde, and Dan Simmons' heavy tome about Charles Dickens' mysterious last years, Drood.

This alert is about a book trilogy co-written with Chuck Hogan about a vampire strain that threatens to take over New York and then the world. Even if you're weary from the over saturation of the vampire market, you might still want to check this one out. I'm listening to it on CD and it is one frightening tale. You have to know it's bound to go above and beyond the garden-variety vampire story if it has del Toro's fingerprints all over it.

About The Strain
They have always been here. Vampires. In secret and in darkness. Waiting. Now their time has come.

In one week, Manhattan will be gone. In one month, the country.

A Boeing 777 arrives at JFK and is on its way across the tarmac, when it suddenly stops dead. All window shades are pulled down. All lights are out. All communication channels have gone quiet. Crews on the ground are lost for answers, but an alert goes out to the CDC. Dr. Eph Goodweather, head of their Canary project, a rapid-response team that investigates biological threats, gets the call and boards the plane. What he finds makes his blood run cold.

In a pawnshop in Spanish Harlem, a former professor and survivor of the Holocaust named Abraham Setrakian knows something is happening. And he knows the time has come, that a war is brewing . . .

So begins a battle of mammoth proportions as the vampiric virus that has infected New York begins to spill out into the streets. Eph, who is joined by Setrakian and a motley crew of fighters, must now find a way to stop the contagion and save his city—a city that includes his wife and son—before it is too late. (from The Strain's book flap)

Guillermo del Toro talks about his interest in vampire lore

Tressa Fancher said…
I've never seen Cronos but will add it to my movie wish list.

I wonder what del Toro's fascination with Ron Perlman is? I read where he fought to have Perlman star in his Hellboy movies, and refused to make them unless he got his way. Regardless, Perlman has delivered his entire career.

I'm listening to The Strain on CD, and guess who's reading it? Perlman. Great voice.
2:39 PM