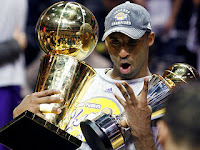 Kobe finally admitted it. “Question: How is this different from your previous three rings? KOBE BRYANT: Well, I just don’t have to hear that criticism, that idiotic criticism anymore. That’s the biggest thing. I don’t have to hear that stuff anymore.” Kobe won a championship without Shaq and Orlando has their first franchise Finals win. The NBA can now breathe a sigh of relief.

Let’s talk about the Orlando Magic for a minute. Even if the Magic had won Games 2 and 4, I still think the Lakers would have won the championship in 7 games. You cannot miss free throws (Dwight Howard), fail to close-out on defense (Turkoglu, Nelson) and expect to win the NBA Finals. Good teams always find a way to win, especially when you keep giving them opportunities to do so. The Lakers played good team defense, their bench stepped up, and the veterans (Derek Fisher) made clutch shots when the game was on the line.

It’s tough to make it back to the NBA Finals, but the Los Angeles Lakers proved that they deserved to be there. The experience will make Orlando a better team and hopefully they will get a chance to play for another championship. I wasn’t picking on the Magic in the last paragraph, they are a tremendously good team. But like I've said before, the only thing that matters is the score at the buzzer.

Don’t go through basketball withdrawal, check out the subject guide on Basketball and visit the library to check out books on your favorite teams and players. Also, the WNBA season just started and those ladies have game.
By G. Jones