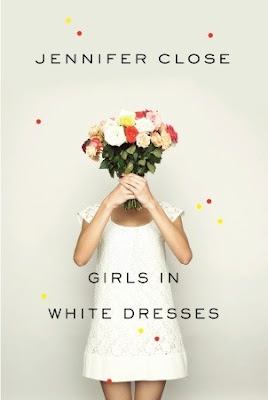 Ah, to be twenty-two again; or maybe not. The girls referred to in Jennifer Close’s debut novel are young, well-educated, and eager to begin their adult lives. Three college friends, Isabelle, Lauren, and Mary have settled in New York City for work and law school. Follow each young woman (and several of their friends and co-workers) as she takes those first tentative steps into adulthood, experimenting with careers, relationships, and living arrangements.

Just as the characters begin to find their footing in the job market the weddings begin, hence the “white dresses” of the title. The romantic relationships chronicled here may not seem ideal, but they are described with such realism and empathy that I found myself rooting for every one of them. In the end, however, the relationship that the author is most concerned with is the women’s relationship with each other. Though their lives change via marriage, job loss, and motherhood, the three friends still support and love one another.

A few caveats: The chapters are told from the points of view of the different characters, with Isabelle as the main character getting more chapters than the others, and the book’s non-linear style can take some getting used to. While the different chapters come together to form a loose plot, most of them can stand alone and the book almost feels like a collection of short stories. Readers looking for lots of drama will be disappointed, but those looking for quirky dialogue and spot-on observations about life and love will be rewarded. While I have never been a single woman living in New York, I hope that if I was I would have a group of friends as funny and loyal as the Girls in White Dresses.