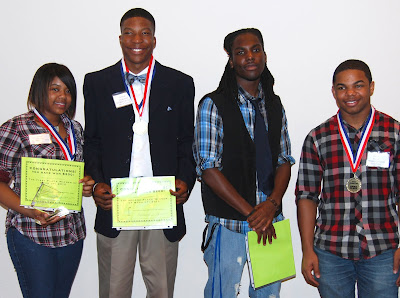 WORD UP! is an annual poetry slam for high school students who are enrolled in schools, or home schooled, in Jefferson County. At the event held on Sunday, April 1, Eboni Wallace walked away with the grand prize. Eboni is a 10th grade student at Tarrant High School. Also stepping onto the stage to receive cash awards were second prize winner Derrick McKenzie, a 12th grade student at Hewitt-Trussville and two winners who tied for third place, Jeramie Scott, a 10th grader at Woodlawn High, and Justin Wright, an 11th grade student at Shades Valley High School. Other schools represented by the more than 25 participating students included the Alabama School of Fine Arts, A.H. Parker High, Spain Park, and Wenonah High. The slam was sponsored by the Birmingham Public Library (BPL).

WORD UP! celebrated its fifth anniversary this year. Students in grades 9 through 12 wrote and performed original poetry inspired by a theme selected by the event planning committee. In keeping with the spirit of this year’s anniversary, the theme for WORD UP! 2012 was “milestones.” Each participating high school held a preliminary contest where the first and second place winners at each school moved on to the WORD UP! competition. Contestants on April 1 faced a cheering audience of more than 110 guests and a panel of three judges. Jim Reed, owner of Reed Books, served as the emcee. The judges were Jerri Hardesty, Barry Marks, and Erika Wade. Jerri Hardesty has competed in poetry slams at the national level and is an experienced slam host. Barry Marks is a poet and attorney whose book of poetry, Possible Crocodiles, was named Alabama’s poetry book of the year for 2010 by the Alabama State Poetry Society. Erika Wade won first place at WORD UP! the first two years of the competition as the representative of the Alabama School of Fine Arts (ASFA). After graduating from ASFA, Wade enrolled in the University of Alabama in Tuscaloosa (UA). She is the current editor of the UA's literary journal, Marr's Field Journal and is a Teach for America Rising Leaders Fellow. Word UP! 2012 is made possible by grants from the Alabama State Council on the Arts and the National Endowment for the Arts.

The first WORD UP! was held in 2008 as part of The Big Read for Jefferson County in which public libraries encouraged county residents to read and discuss To Kill a Mockingbird by Harper Lee. The Big Read was an initiative of the National Endowment for the Arts designed to revitalize the role of literature in our lives.
By Tressa Fancher