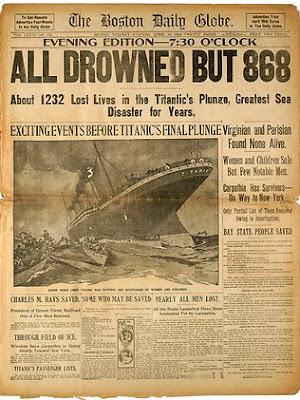 You’ve seen the movie and TV shows and maybe you’ve read some books about the sinking of RMS Titanic 100 years ago. But if you want to read actual documentation of the Titanic disaster, read the documents available on the U.S. Serial Set Digital Collection database.

This database gives access to documents created by each of the United States Congresses since 1789. You can do advanced searches or basic ones, like the one for information on Titanic. Enter “Titanic” into the search box, and you’ll retrieve ten documents produced soon after the sinking occurred—and all in full text. Three can be singled out for their detailed content.

Hearings on Titanic Disaster (May 28, 1912) is an 1176-page report of the Senate Committee on Commerce’s questioning of dozens of witnesses. These included J. Bruce Ismay, the General Manager of the White Star Line and also a passenger, and Guglielmo Marconi, inventor of the telegraph and then chief engineer and chairman of Marconi Wireless Telegraph Company.

Report of British Government on loss of steamship Titanic (August 20, 1912) is based on information gathered from twenty-six specific questions, such as “Was proper discipline maintained on board after the casualty occurred?”

Report on investigation into loss of British White Star liner Titanic (May 28, 1912) is the United States Senate’s findings. In addition to the narrative of events, it also has a complete listing of the crew and the first-, second-, and third-class passengers, including their addresses.

As time has passed, many more facts have been established (the assumption is made that Titanic sank in one piece, for example). However, nothing can compare to the first-hand accounts.