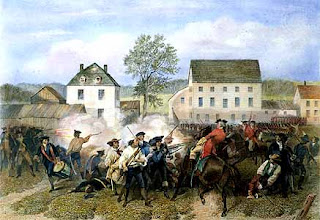 "Stand your ground. Don't fire unless fired upon. But if they mean to have a war, let it begin here."

These are the words of American Captain John Parker, engraved on the stone at Lexington Green where American minutemen and British redcoats came to blows. It was the commencement of the American Revolution and end of the British hold of the colonies.

General Thomas Gage, then Governor of Massachusetts, was secretly ordered by King George III to enforce the Intolerable (or Coercive) Acts, law enacted as response to the Boston Tea Party with the intent to gain control and bestow punitive measures to the colonies. Gage was also ordered to suppress any and all rebellion, using any force necessary.

On April 18, Paul Revere and William Dawes learned of the attack and set out to warn the colonists, especially Samuel Adams and John Hancock who were main targets. A signal of two lanterns meant the troops chose a route “by water.” Revere and Dawes rode out, alerting all members of the militia of the impending attack.

At dawn, about 70 armed colonial minutemen met the British army and pushed the them back to Boston. Captain Parker was well aware that he and his American men were largely outmatched, but they stood their ground. And there it was, in the wee hours of April 19, 1775, the shot heard around the world.