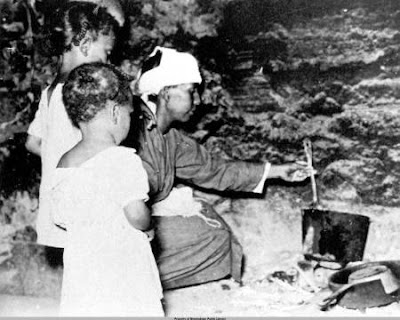 The world knows Gee’s Bend, Alabama, for the famous quilts made by many of the women in the community. But long before Gee’s Bend became a phenomenon—the subject of nonfiction books, children’s books and at least one novel, major museum exhibitions, a stage drama, television documentaries and a marketing campaign with quilt images on postcards and coffee mugs—the Birmingham Public Library Archives helped the residents of the community document their history in their own words.

In the late 1970s, BPL’s first Archivist, Marvin Whiting, applied for and received a grant from the National Endowment for the Humanities to conduct oral history interviews with the older residents of the Bend and photograph the people and their community. Working with author and storyteller Kathryn Tucker Windham and photographer John Reese, the project conducted approximately 30 interviews and made hundreds of photographs.

The interviews provide a rare first-hand account of the lives of African Americans in an isolated rural Alabama community between 1910 and 1981 as they discuss, among other things, food traditions. Using these interviews, BPL Assistant Archivist Kelsey Bates is one of the first scholars to study an aspect of the Gee’s Bend story other than the famous quilts. Her article, “Comfort in a Decidedly Uncomfortable Time: Hunger, Collective Memory and the Meaning of Soul Food in Gee’s Bend, Alabama” is published in the scholarly journal Food and Foodways, in a special issue examining hunger and frugality. As Kelsey explores, nearly every interviewee remembers a catastrophic incident during which the family of a deceased white merchant, who had been lending Gee's Benders agricultural supplies, collected (with force) all of their agricultural property. Lacking any means to support themselves, residents were required to eat what they had hidden away, share their food with each other, and find comfort in the familiar foods that had become a part of the community's cuisine. The incident left a lasting community-wide association between food, ownership, and freedom, conveyed in the interviews through a collective narrative. The narrative reinforces the idea that Gee's Bend food traditions developed out of a long history of adversity with whites, food sharing and frugality, and reliance on God. The Gee's Bend interviews provide a local example of the evolution of American soul food and a fascinating examination of the culture of African Americans in rural Alabama.

The Gee’s Bend interviews and photographs are preserved in the BPL Archives and have been used by researchers from throughout the world. This collection reminds us that often archivists and librarians recognize the historic value of an object or a story first, and they preserve it. Once preserved, these bits of history make possible the books, exhibitions and documentaries that come later.

Irene Latham said…
Those audio files were invaluable to me in my research for LEAVING GEE'S BEND. Thank you!
9:09 AM

KJ said…
Irene, we are so glad to know these were useful to you. There have been so many wonderful things to come out of Gee's Bend.
9:18 AM