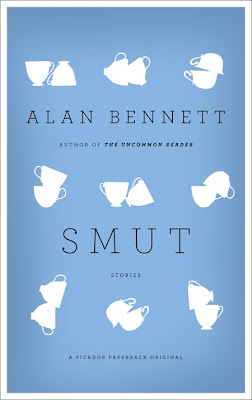 For at least fifteen years Alan Bennett has been one of my never-miss fiction writers (he also writes un-missable memoirs, plays, journalism and more). His short stories expertly, and often hilariously, reveal the misunderstandings, snobbery and—best of all—embarrassment that so define the English.

In "The Greening of Mrs Donaldson," the first of the two stories in this book, the title character carries the talent she developed muddling through her marriage to her late husband into acting out patient symptoms for medical students. Why not get paid for something she’d always, in effect, done? She also takes in a young couple to supplement her income. They get behind in the rent and ask Mrs. Donaldson if they can take it out in trade, albeit in an indirect way. She soon begins to wonder of the young ones: Is this more playacting along the lines of what she and her late spouse Cyril so often resorted to? Public faces mutate, but they always seem necessary. On one occasion, Mrs. Donaldson, bored by the floor show, finds herself “looking at the floor and wondering if it was time she had the carpet cleaned.” She may consider herself a bit of a bore, but not to the reader, not with observations like this.

"The Shielding of Mrs Forbes," the companion story, offers another stereotype-exploding cast of characters many opportunities to deceive, lie to and cheat each other as well as themselves. Bennett perfectly balances social probing and hilarity, as he does in so many of his creations. As in the previous story, snobbery is displayed to winning comic effect: “Still she felt a church ceremony was essential if only to demonstrate that the bride was neither pregnant nor Jewish.” This tale reads like a present-day Moliere piece, but that only partly gets at its fun. The older writer would certainly take his hat off to Bennett, if given the revival chance.

As always, Bennett has compassion for all of his characters. That might seem odd, with all the deception going on, but that’s one of the great achievements that he pulls off. You’ll probably have compassion, too, because, if only in a small way, his characters are us.