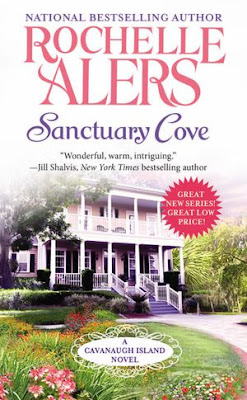 Rochelle Alers introduces a new series that takes place on Cavanaugh Island, considered as Low country in South Carolina. Residents in Sanctuary Cove adhere to 400-year-old traditions, and a much slower pace of living.

Deborah Robinson is recently widowed. Her best friend and husband of eighteen years drowned after attempting to save three boys who were swimming in a rip tide. Prior to his death, her husband was involved in a high school scandal that implicated him in an affair with a pregnant teen.

In order to remove herself from the hurt and loss, Deborah Robinson sells her home and moves her two teenaged children from Charleston to Sanctuary Cove. They reside in her grandmother’s house.

Sanctuary Cove is also home to snowbirds who visit during the winter months. This is where Dr. Asa Monroe enters the story. Asa has experienced a loss. Not only did he lose his wife, but his six-year old son, as well. He is only in town until Doctors Without Borders approves his application.

Deborah opens a bookstore called The Parlor in Sanctuary Cove and hires Asa as her part time assistant. Business is flourishing at the bookstore. Debs, as Asa fondly calls Deborah, has events planned for the bookstore including themed months, book clubs, and three o’clock tea times. Since Asa plays the piano, beautifully, Debs has him to play at The Parlor which brings in the ladies. Things are going well. Asa and Debs are getting closer. Will the relationship blossom? Read Sanctuary Cove to enjoy the answer.

Angel’s Landing will be the second installment in the Cavanaugh Island series.