- October 22, 2019
As a member of the Birmingham African American Genealogy Group, Wanda Looney spends much of her time helping fellow African Americans gather information about their ancestors.

A lot of that history is buried and abandoned in the ground, she says. There are over 100 black forgotten cemeteries in Jefferson County, Looney said while presenting a workshop, Missing and Abandoned African American Cemeteries, at North Birmingham Regional Branch Library on October 21 as part of the Birmingham Public Library’s 2019 Family History Month series.

“These are our ancestors,” Looney said, pointing at photo of a wooded area in Pratt City believed to contain 4,000 hidden black graves—some dating back over 200 years. “They didn’t think their graves would be looking like this. We need to find out where they are, who they are, and bring their names to light because they are somebody’s relative.”

The Birmingham African American Genealogy Group meets monthly at the Central Library, and helps African Americans research their ancestors. Family History Month is observed annually since 2001 during October to promote the importance of family and researching your family tree.

Among the information Looney shared:

• In Pratt City, there is an area full of acres of woods that is believed to contain 4,000 hidden black graves. “You can’t get to it because they’ve cut a road through there now,” Looney said. “It is in a heavily wooded area with lots of trees. We have tried to find out who the owners were so we can get the place cleaned up.” 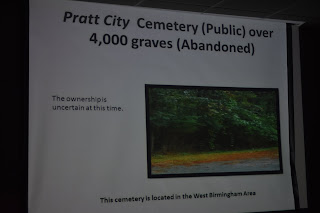 • Looney recalled an area of Smithfield she visited trying to help someone find their African American ancestors. “When I called a lady about the cemetery, she said I have an uncle buried there, but you will never find it. You go out there and there is nothing for miles but wooded area.” 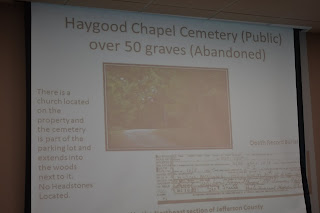 • Looney told of how she drove around for hours looking for the Lola City Cemetery, another hidden black cemetery. "I found this guy who told me the history of that whole area," Looney said. "He said there was supposed to be a cemetery outside the church, but at the last minute they decided not to have one and just buried them in a field."

“These are our ancestors,” Looney said. "They didn’t think their graves would be looking like this many years later. If we don’t do anything, what will our graves look like in 50 to 100 years? This is where our ancestors lived when they came to Birmingham and Jefferson County. We can’t forget them.”

Looney said money in Jefferson County and Birmingham must be set aside to help preserve abandoned African American graves.

“We need to find out where they are buried, who they are and bring their names to light because they are somebody’s relative,” Looney said.

The Birmingham African American Genealogy Group has been asking their members—and other blacks in Jefferson County—to research where their family members came from, even if that property is now a Walmart parking lot or another development.

“We must research and preserve our history and where our ancestors grew up,” Looney said. “If Mr. Man’s farm was right here, that’s where your ancestors are buried. They are calling on us to not forget them because they went through a lot to get us to where we are today.”

Looney said a lot of developers are buying up land that has hidden black cemeteries on them. She told the story of a Jefferson County developer who was able to buy unclaimed property and build houses on land containing an unmarked black cemetery.

“A lot of people are buying up land because they know if we die, our kids up in Detroit or outside Alabama won’t care about the property," Looney said.

She urged blacks to put a fence around ancestor’s burial grounds, even if there isn’t a headstone, to preserve it.

“Developers will buy land and not care about our history,” Looney said. “When you come back down, the developer won’t tear down a subdivision so you can claim your momma’s grave. Honor our ancestors, honor the dead.”

Looney’s workshop was held five weeks after the Tampa Bay Times reported that more than 120 graves in a former historic black cemetery were discovered in September 2019 on the grounds of an apartment complex in Tampa, Florida. The site is believed to be Zion Cemetery, built in 1901 by a black businessman as the first in the city for African Americans.

In February 2019, Forbes magazine reported that in the past year alone, several historic African American graves have been discovered. They include archaeological testing uncovered the remains of a 19th century African American burial ground in Philadelphia; construction crews in Fort Bend County, Texas, finding nearly 100 unmarked graves of black prisoners believed to have been leased to work in sugar fields as part of the system of convict leasing; and archaeologists working for the Maryland Department of Transportation discovered an enslaved community's cemetery in Crownsville, Maryland.

JJFlowgoer said…
Great article. Is there by chance any organized local effort or group through which we can volunteer/join an effort to clean, restore and sustain these cemeteries?
8:02 AM