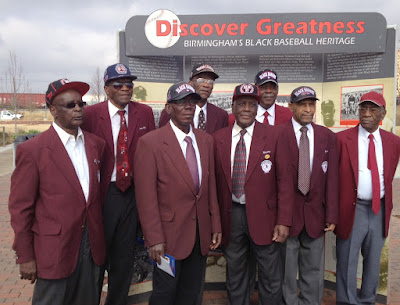 Smithfield Branch Library houses one of the original traveling exhibitions created in 1995, at which time the library system hosted a national exhibition on Negro League baseball. In conjunction with the larger exhibition, a small, locally-themed display and extensive programming were created, focusing on Birmingham’s black baseball heritage. The display—still in great shape after nearly seventeen years—was used as a backdrop to honor the former Negro League players on hand for the groundbreaking event. Several former Negro League players proudly posed in front of the display which was installed and heavily guarded by members of the library’s Maintenance Department staff. In celebration of the groundbreaking, BPL will continue its focus on baseball throughout the month of February. Mamie “Peanut” Johnson, one of three women to play in the negro leagues, will be on hand Monday, February 27 to share her story with students at the Central Library. This dual purpose program—focusing on both baseball and a February salute to African American women—begins at 10:00 a.m. in the Richard Arrington, Jr. Auditorium. Admission is free and open to the public.

Festivities surrounding the groundbreaking took place on Thursday, February 2, just across the street from Railroad Park. The new stadium will bring the Birmingham Barons back to the City and will include a museum highlighting Negro League baseball players. Visit the library’s website at www.bplonline.org for extensive information on many of the local players from this historic time period.
By Tressa Fancher