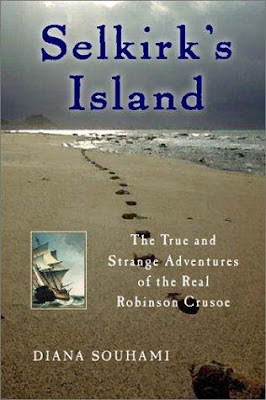 The subtitle of Selkirk's Island is, for once, not just a publisher’s come-on. For those like me who were entranced by the Daniel Defoe novel, this biography of Alexander Selkirk, the model for Crusoe, will be welcomed. Surprised that there was a Selkirk biography, I was even more surprised, when I looked into the matter, that there were several. This one seems to be the best. Among other things, it won Britain’s Whitbread award for biography in 2001.

My start with Selkirk was in the 1970s. The delightful People’s Almanac had a short piece on Selkirk that I read several times. Decades later, when I discovered the Souhami book at a library sale, it seemed too good to be true. They’d written an entire book on Selkirk? And later: Several books on him? But he’s still obscure, though he doesn’t deserve to be. Perhaps only the gigantic shadow of the character Crusoe has made Selkirk largely unknown. But Selkirk is equally fascinating.

Alexander Selkirk (1676-1721), sailor, inhabited a world that, prior to this book, I’d almost always found very boring: wooden ships, their crews and the seas they navigated and plundered. But Souhami’s vivid prose converted me. As a navigator, Selkirk was a master of the plumbline, wooden quadrant, cross-staff, back-staff, azimuth, steering compass, nocturnal and sundial. Just as sufficiently advanced technology, in Arthur C. Clarke’s phrase, seems magical to less-technological cultures, so sufficiently antiquated technology seems magical to us.

The hierarchy on Selkirk’s ship was anything but magic-making, though. Selkirk’s captain wasn’t especially enlightened, or even remotely fair, and, not wanting anyone to question his command, he exiled Selkirk to a deserted island hundreds of miles off the coast of South America. So, after a series of grueling crises on the sea, Selkirk is thrown into a far greater series of events. The second series-on the island-are heartbreaking, horrific and, somehow, oddly inspiring. It’s one of the most cathartically dramatic accounts I’ve ever read.

Souhami’s description of the island is bracing, poetic and palpable. It is you-are-there writing that deserves its name. The island, part of the Juan Fernandez Islands group, would, in the late 17th/early 18th century, drive most anyone insane, even if they had a companion or two. The wind constantly howls. There’s no technology except a few shipwreck pieces that happen to wash ashore. Rats run seemingly everywhere. Finding food is more than onerous. But Selkirk struggles valiantly and, gradually, adapts himself to the brutal realities of his situation. He eats and drinks organically, but by no means in a PC way. What did he eat, anyway? “…a broth of goat and cabbage, flavoured with herbs, a roasted fish, baby seal fried with turnips, boiled lobster with oatcakes.” (Reading this sentence for the first time made me hungry-a testament to Souhami). He becomes by necessity a better cook, tailor, carpenter, more. It’s marvelous enough to read about Crusoe’s budding survival skills; to read about Selkirk’s is even more fascinating because they’re more plausible. Things he’d thought were essential he finds he can do without: “salt, liquor, tobacco, shoes.” His adaptation becomes exultation and exaltation: increased joy, well-being, intensity. Rousseau would be proud. But as far as Selkirk’s sexual life goes, Rousseau would not be proud. Neither would the Church. But it’s hard to judge a man who, through no fault of his own, is pushed to extremes of loneliness-and painful extremes of many more things-that almost no one in history has ever had to endure.

Later on we find Selkirk swinging from the lianas “with the grace of an ape.” Edgar Rice Burroughs would be proud. He befriends the wild cats of the island; they keep down the rats and give him something like a society to live in. Frustratingly, ships appear, then disappear, on the horizon. Selkirk can do nothing to make them land. It would be four years before he was rescued. Time wholly without other people, or even the possibility of same, with virtually no hope of release, has to be measured in a radically different way. Four years is not four years.

There are many more marvels and adventures in Selkirk’s Island I won’t go into here. You do need an incentive to read the book, don’t you? Somehow, Selkirk never fits into any understandable frame. He never truly fit in anywhere, whether it was sea or land, civilization or wilderness. Neither you, or the author, or anyone else, will ever fully understand this man. Let me say that, by book’s end, you feel you have been exiled, traumatized, transformed, made happy, released. “Vicariously” is too weak a word to describe the experience. I don’t think you can ask an author to do more than that.