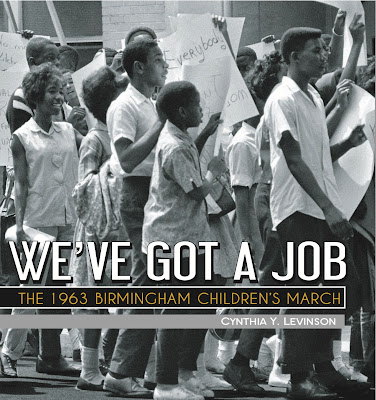 Revolutions are made by small groups of people. Most American colonists did not fight the British. And in Birmingham most people, black and white, sat out the street protests that helped end legally sanctioned racial segregation. During the Civil Rights demonstrations of April and May 1963, a few more than 1,000 adults were arrested. Not enough to fill the jails and force white officials to negotiate a truce. The shock troops of the Birmingham movement were children and teenagers who marched and were arrested by the thousands — no one is sure how many. Cynthia Levinson tells their story in We’ve Got a Job: The 1963 Birmingham Children’s March (Peachtree Publishers, 2012).

The young people featured in We’ve Got a Job each came to activism in their own way. Audrey Hendricks was a child of Civil Rights workers. She attended mass meetings with her parents and wanted to make her own contribution. James Stewart, son of a physician, learned that his comfortable middle-class life did not protect him from the indignities of segregation. And while his family lived in a comfortable home with a swimming pool, he saw the poverty of other African-American children. Arnetta Streeter, also a child of activists, helped found the Peace Ponies, a service club at all-black Ullman High School. Originally planning to mentor younger students and practice thrift, the Peace Ponies decided to battle segregation instead. Wash Booker, who liked to wear “a Davy Crockett coonskin cap,” remembered standing at the window of Newberry’s Department Store watching the white people inside eat banana splits at the lunch counter. He wanted one too.

During the climax of the demonstrations, the Birmingham police arrested so many young protestors that they filled the city jails. Like many of the kids who marched, Wash Booker played hooky without his mother’s knowledge to go to the demonstrations. When she dropped him at school, he went in the front door and straight out the back door with hundreds of other young people. Unable to arrest more, Bull Connor tried to drive the demonstrators from the streets with dogs and fire hoses. Young bodies absorbed many of the blasts as children and teenagers held on to one another. Arnetta Streeter recalled that she and another girl were “hugging together; and the water just washed the two of us down the street.” The pressure from the hoses tore away clothing and young girls were picked up by the force of the water and thrown over the tops of cars. But the children kept coming. Bull Connor vanquished many opponents during his long political career, but he was no match for the Peace Ponies.

As world opinion bore down on Birmingham and the peaceful demonstrations turned to riots, the city’s black and white leaders worked out a compromise. They desegregated department stores and agreed to talk about desegregating schools and the police department. Looking back over fifty years, it doesn’t seem like much. But it was more than white Birmingham had ever given up and it was an important step toward ending legal, if not actual, segregation. For the young people who helped lead the revolution, it meant they were freer to grow up as full citizens of their country, and freer to be kids. Arnetta Streeter went to the movies at the Alabama Theatre and sat on the main floor, not in the balcony. Audrey Hendricks had dinner out with her parents “at restaurants where they had never been able to eat.” James Stewart watched the world changing around him with pleasure, and like Arnetta, took in a movie at the Alabama. Wash Booker went to Newberry’s and sat on a stool at the shiny, stainless steel lunch counter. He ate ice cream.

Cynthia Levinson, Washington Booker, James W. Stewart and Arnetta Streeter will speak at the downtown Birmingham Public Library, on Thursday, Feb. 23 at 6:30 p.m. The event is free and open to the public. Copies of We’ve Got a Job will be available for purchase and signing.

Jim Baggett is Archivist at the Birmingham Public Library. He can be reached at jbaggett@bham.lib.al.us. Follow the Archives on Facebook.
By Tressa Fancher