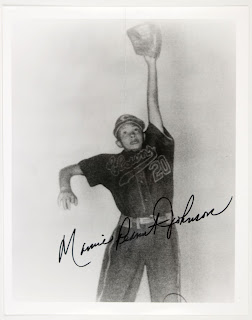 During an era when playing professional sports was filled with obstacles for women and African Americans, Mamie “Peanut” Johnson was one of just three women to play in the Negro League. Now 77 years-old, Johnson will take her anticipated audience of middle-school students and others on a journey back in time to when she was a 100 pound ballplayer breaking into the game. Come out and celebrate Black History Month and baseball with the Birmingham Public Library on Monday, February 27 at 10:00 a.m. in the Richard Arrington Auditorium of the Central Library. Johnson’s autobiography, A Strong Right Arm written by Michelle Y. Green, will be available for purchase and signing.

Johnson’s skill, passion, and commitment to play scored her a spot on the roster of the Indianapolis Clowns. In 1953 Bish Tyson, a former Negro League player, observed Johnson practicing. Recognizing her athletic abilities, he suggested she play professional ball and introduced her to the manager of the Indianapolis Clowns. After only one tryout, Johnson made the team. Johnson played professional baseball for three seasons from 1953 to 1955. During her tenure, she won 33 games and lost 8. Her batting average ranged from .262 to .284. "Just to know that you were among some of the best male ballplayers that ever picked up the bat, made all of my baseball moments great moments," Johnson proudly stated.