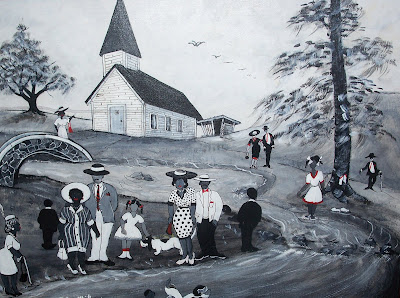 Though material possessions were limited in the rural area where Maurice Cook grew up, his family was rich in love, warmth, and compassion for one another. These are the elements and emotions reflected in his exhibition Simpler Times: The Paintings of Maurice Cook. This show by the Birmingham resident and folk artist who grew up in Carbon Hill opens in the Fourth Floor Gallery of the Central Library on Tuesday, February 28, and runs through Friday, April 13.

Cook is self-taught and his work depicts people enjoying life and activities typically found throughout the rural South. One of the characteristics of Cook’s art is that although the activities are easily identified, the people are anonymous—they do not have faces. He paints them without facial features to create images that can be universal. Cook explains, “I want all people to relate to my paintings. I try to tell the story with body language.”

He began painting professionally in 1994. Working primarily in acrylics, Cook’s art is honed from experiences and impressions through his lens on life—working as a juvenile detention officer, barber, welder, and fireman. Cook has exhibited in numerous shows including the Birmingham Art Walk, Montevallo Art Show (where he was recipient of the 2010 Award of Excellence), Fairhope Arts and Crafts Festival, and the Virginia Highlands Festival in Abingdon, Virginia.