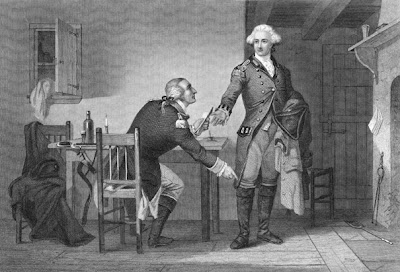 Recently I was helping a class research term papers on American history topics. One of the students asked me why Benedict Arnold did it. That is, why did he betray his country? Here at the Central location of Birmingham Public Library we own several biographies of Arnold, including a new volume by Steve Sheinkin. And, of course, we have a substantial number of books on the American Revolution. I pulled the books, but I wanted a source that would not only quickly answer the student’s question, but also bring some bit of this sordid tale to life. So, I showed him Birmingham Public Library’s databases.

On the left-hand side of the screen is a list of our databases arranged by broad subjects. I clicked on the word history, which took us to a list of history databases. We have over a dozen databases under ‘History,’ but I focused on History Reference Center and U.S. History in Context. In the History Reference Center I simply typed in Benedict Arnold. One screen later, and five entries down, we found an American Heritage article titled “Why Benedict Arnold Did It.”

This article answered the question, but I still wanted to bring this incident to life. I went to U.S. History in Context, typed in Benedict Arnold and found not only encyclopedia references, but…“everything.” Literally. (On the left-hand of the screen is an “everything” tab which leads you to images, academic journals, magazines.) I clicked on images and there was a drawing of a rather jowly Arnold during his salad days. But the drawing of Arnold directing fellow spy and British officer John Andre “to hide important papers in his boot” brought his treachery to life for me and, I hope, the student. These ‘important papers’ were nothing less than detailed instructions on taking the American fort at West Point.

As to why Arnold betrayed his country? Over his lifetime he offered many and varied excuses. He cited the failure of Congress to reimburse him for the personal funds he had spent on the Continental Army. At other times he complained of the politically inspired court martial that had marred his name years before. He even railed against the treaty America signed with France. What we do know for a fact is that after fleeing the American lines, he accepted less than £10,000 from the British and a commission as a brigadier-general commanding a unit of deserters. In short, he did it for the money. But the joke was on Arnold. He died in near-poverty and obscurity in England. By his own admission he lived"…comfortable but not sufficiently elevated to be the object of envy and distinction."

Want to bring an historical figure to life? Visit our history themed databases. Entries of some later events such as the attack on Pearl Harbor even include video. Go to www.bplonline.org, click on databases on the top right corner. The subject list is on the left.

Mary Anne said…
This made me think of how Diana Gabaldon describes Claire's reaction to Benedict Arnold in one of the Outlander novels. She's already spoken to him for a few moments before she finds out who he is, and the revelation makes her feel sick. She thinks, I liked him. He's kind, polite, amusing---and soon to be a traitor, largely because he's slighted by his superiors. It's an awful warning about what can make someone go terribly wrong and how easy it is to BE that someone.
4:49 PM