Book Review: Fringe-ology: How I Tried To Explain Away The Unexplainable—And Couldn’t

- October 30, 2012
Fringe-ology: How I Tried To Explain Away The Unexplainable—And Couldn't
Steve Volk

For years, I used to read a lot about the paranormal but eventually got frustrated because I wanted there to be proof and there never seemed to be, even though some leading universities researched the topic. As for the non-university world: forget it. Enter this book. Whether or not it provides proof is debatable. Steve Volk isn’t so concerned with handing proof over as assembling accounts that strongly suggest such proof. A lot of this debate about proof depends on what we call paranormal in the first place, and how open our minds are to the possibility of it. The two main barriers are, per Volk, religious narrow-mindedness and over-zealous scientific materialism. Both camps are especially tied into the fact that we are predisposed to “emerge from every conversation with our belief system intact.” 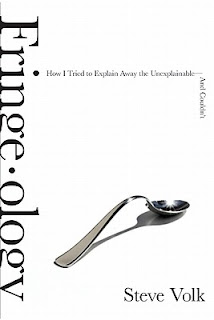 Topics covered included life after death, telepathy, consciousness outside the brain, and the research backing meditation, prayer and lucid dreaming. Scientists with PhDs at universities have been studying these topics and more for years, even decades. They carry out experiments under strictly controlled conditions, employ double-blind studies and live very cautious academic lives, never using the word “paranormal” (or God forbid, “religious” or “supernatural”) to describe their work. They are extra-sober because of the prejudice establishment scientists have toward anything hinting at the paranormal. Their studies are so cautious, apparently, that some scientists (not affiliated with their sphere) say their methodology is actual stricter than the norm, and that they are held up to overly-stringent standards not expected of more mainstream scientists. More worrisome, Volk documents how some leading skeptic groups, in their attacks on these nouvelle scientists, distort and ignore data. Reading this, I thought: We need to be more skeptical of skeptics. As well as, of course, being more skeptical in general. Later on in the book, Volk says just that.

Will these new studies cause a rewrite of the laws of physics? Will they confirm evidence of the supernatural? Will they lower scientific standards? The scientists here say, “No.” But that doesn’t mean their science is routine. Among the many fascinating revelations in Fringe-ology are: that there is no longer a wall between the micro quantum world and the macro Newtonian one; that microtubules in human cells may be the seat of consciousness; that consciousness after death may be possible because of the workings of quantum entanglement; that supposed poltergeist activity is accompanied by sound waves that appear nowhere else and haven’t been replicated; that most astronauts experienced, while in space, mystical states in which they felt at one with the universe (I wonder what, if anything, the cosmonauts felt); that “the brain isn’t built to give us a true and accurate perception of reality”; that our brains “literally rewire themselves, down to the genetic level.”

[By the way, two scientists profiled in Fringe-ology, Roger Penrose and Stuart Hameroff, were recently featured on the TV show Through the Wormhole.]

In the book, Volk references the influential classic The Structure Of Scientific Revolutions by Thomas Kuhn, which shows how, through history, science doesn’t always welcome game-changing new discoveries, but how it does, in time, adapt to new paradigms. Fringe-ology may well show such structures of scientific revolutions, ones that might begin to bridge the cultural gap between science and religion. It’s enormous fun to read, and you may come away from it feeling smarter, or at least feeling that your belief system is a bit less intact. These two are not unrelated.