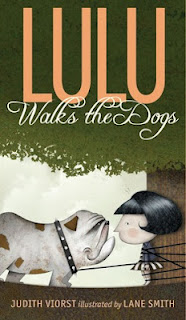 For those of you who loved Lulu’s first adventure in Lulu and the Brontosaurus, here’s a brand new title from Judith Viorst chronicling Lulu’s latest exploits. Lulu sets her sights on something big and she won’t rest until she has it! When she asks her parents to get it for her they tell her she’ll have to earn the money for it herself. They simply can’t afford it. So that settles it, Lulu is stubborn and determined if nothing else. So she sets off to find a job so she can earn all the money she needs. She tries things like reading to old people, baking cookies, and spying. Obviously none of those work out because the book is called Lulu Walks the Dogs. She decides that she has just enough time to walk a dog in the morning before she goes to school…well, if she has time to walk one, surely she can handle two. As long as she has two she might as go ahead and take on three. She’ll have her money in no time if she walks three every morning before school. But no plan can be perfect. Fleishmann, the neighborhood goody-two shoes, selflessly volunteers to be Lulu’s assistant free of charge. While this might seem like a nice gesture, to Lulu it is a complete nightmare. I think it’s a feeling everyone can relate to. This Fleishman kid plays flute for fun, he’s flawlessly polite, he’s even so smart that they don’t make him go to school every day! He makes her so furious that she won’t accept help from him, at least not until she’s in over her head.

Judith Viorst and illustrator Lane Smith make a perfect pair for this series. Smith’s illustrations perfectly express the humor and offbeat attitude of the story. The parts of the book which would normally only be amusing are downright hilarious with the help of Smith’s tasteful yet offbeat style. If you’ve never read Lulu and the Brontosaurus, then don’t worry, you won’t be lost. This book doesn’t require any prior knowledge to enjoy the characters and the story. This narrator becomes as much of a character as any other in the book, they directly address the reader with asides and “time outs” which seem to answer your questions the moment you ask them. Well…almost all of them.

This book is a great middle grade novel which is would no doubt be funny to all readers whether they’re children or adults. It would make a wonderful book to read aloud, I was alone while reading it and I was tempted to sing Lulu’s money song, “Jimmy, Johnny, Joseph, Jake! How much money will I make? Laurie, Lucy, Lynn, LaVerne! How much money will I earn?” It’s a fast and funny read. I highly recommend it.