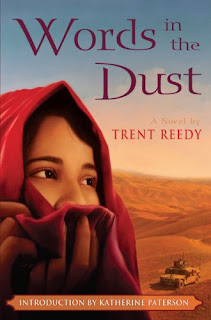 Words in the Dust
Trent Reedy

Thirteen-year-old Zulaikha lives a hard life in rural Afghanistan. She has a cleft palate—a split lip that disfigures her face, making it difficult to eat or talk. Her beautiful sister Zeynab is her best friend and strongest ally. Her overwhelmed and grouchy pregnant stepmother prays for a son, and her much-adored father is scornful of his houseful of girls. By chance, Zulaikha runs into an American soldier who offers to pull in some favors and get her surgery, for free. Zulaikha is on an emotional roller-coaster as she copes with her sister's upcoming wedding as fourth wife to an uncaring older man, and her hopes and dreams are dashed when there's a problem with the helicopter flight that is supposed to take her to the doctor.

Reedy does a great job of portraying the complexities of her father—a powerless yet very, very proud man who wishes the best for Zulaikha, but can't or won't understand something as simple as a weather delay, taking it as a personal affront. This is a man that Zulaikha looks up to and adores, who is regarded as a liberal and kind man, but also doesn't hold back from brutally punching his pregnant wife in a fit of pique.