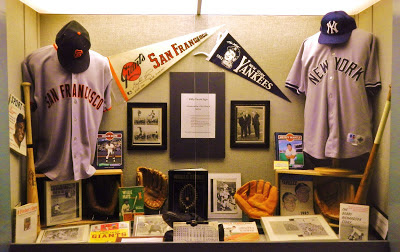 Take me out to the ball game,
Take me out with the crowd;
Buy me some peanuts and Cracker Jack,
I don’t care if I never get back . . .


Baseball fans and others are riveted to the 2012 World Series.

The Detroit Tigers knocked the New York Yankees off the playing field winning four straight games in the American League playoff. The National League playoff was tense requiring all seven games to be played in order to determine a champion. Now the stage is set for the elimination defying San Francisco Giants to face off with the Tigers during the coming days. Even the most casual baseball fan is now glued to the television set, if not lucky or rich enough to cheer their team live at a stadium.

Here at the Birmingham Public Library the bases are loaded.

Come see for yourself as we run the bases back fifty years to the 1962 World Series. Check out the window case display at the Central Library that features vintage baseball memorabilia from the face off between the New York Yankees and the San Francisco Giants.

What a memorable Series with two of baseball’s winningest teams! The Giants had just moved from New York to San Francisco five years earlier. Legendary names appeared on each roster. The New York Yankees boasted the great Yogi Berra, Whitey Ford, Mickey Mantle, Roger Maris, and more. The Giants fielded Willie Mays, Juan Marichal, Willie McCovey, and brothers Felipe Alou and Matty Alou. Don Larsen had been traded just one year prior to the 1962 World Series from the Yankees to the Giants and got his revenge winning the fourth game in the Series for the Giants. When all was said and done, however, the Yankees prevailed in the seventh game.

The large window case at the Central Library is chock full of eye-catching baseball items from the personal collections of Lamar Smith and Clarence Watkins, both members of the Friends of Rickwood and the Triple Play Baseball Club. Bats, balls, catchers’ mitts, uniforms, and pennants are shown alongside photographs and autographs. At least a dozen programs and books are present that are relevant to one or the other of the teams and of the Series. Mr. Smith and Mr. Watkins have artfully arranged these items to capture the lingering gaze of our many visitors. Come join the spectators.

And when visiting, go the second floor to check out the winning sports collection of our Arts, Literature and Sports Department. At the library the bases are loaded. It’s up to you. Hit a homerun.

Let me root, root, root for the home team,
If they don’t win, it’s a shame.
For it’s one, two, three strikes, you’re out,
At the old ball game.