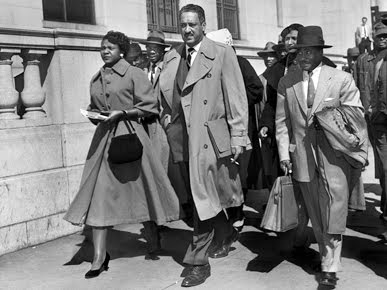 From left: Autherine Lucy, Thurgood Marshall, and Arthur Shores exit the federal courthouse in Birmingham, Alabama, in February 1956, following Lucy's reinstatement as the first black person to be admitted to the University of Alabama.
Photo courtesy of The Birmingham News

The Birmingham Historical Society and the Birmingham Public Library are showcasing the life and times of Birmingham civil rights attorney Arthur Shores in a special exhibit, November 4-December 28 at the Central Library. The exhibit features a scrapbook of newspaper reports and printed materials, which Shores collected throughout his legal and political career.

The Birmingham Historical Society has copied numerous pages of the scrapbook, which is larger than the size of a newspaper, in order to display them in Central Library's 4th Floor Gallery. Shores, who was born in 1904, was a high school principal at Dunbar High School in Bessemer, Alabama, when he became a lawyer in 1937. Although Shores died in 1996 at the age of 92, the scrapbook and exhibit look at his career from 1939 to 1975.

Some of the exhibit highlights include:


"This is real history. These are real documents,'' says Marjorie White, director of the Birmingham Historical Society, of the exhibit and scrapbook. "It's like you were there.''

"The exhibit will be fascinating. There's a lot to read, which library visitors will enjoy.''

An opening reception for the exhibit will be held on November 4 from 3:00 to 5:00 p.m. Remarks will be made at 3:30 p.m. A gallery guide and timeline are available at the exhibit and at http://www.bhistorical.org/pdf/BHS_Newsletter_1112.pdf . 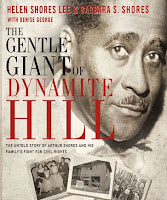 Shores' daughters, Helen Shores Lee and Barbara Sylvia Shores, have written a book about their father. During the November 4 opening reception, they will sign copies of The Gentle Giant of Dynamite Hill: The Untold Story of Arthur D. Shores and His Family's Fight for Civil Rights. They wrote the book with Denise George. Helen Shores Lee is a Jefferson County circuit judge and Barbara Sylvia Shores is director of the Jefferson County Office of Senior Citizens Services. Both say they are humbled that an exhibit features their father, who fought for voting rights, housing issues, educational opportunities and more.

"I'm sure if he were here, he'd be very pleased that there is a recognition of his work,'' says Helen Shores Lee.

During his career, Shores kept newspaper articles about his career in a small scrapbook and suitcase. One day while home from graduate school at the University of Illinois in 1968, Barbara Sylvia Shores took her father's collection and put everything in a huge scrapbook. She had the pages laminated. Today, the scrapbook has 256 pages and includes 170 photographs.

She says she did it so she'd have something to share with her children and their children. "It's a little history book,'' says Barbara Sylvia Shores.

The official name of the exhibit is Attorney Shores' Scrapbook: The Life and Times of Birmingham's Civil Rights Lawyer and Civic Leader, 1939-1975.

Jim W. said…
This brief story shows the importance of preserving and organizing family history for succeeding generations, both family and the larger community.