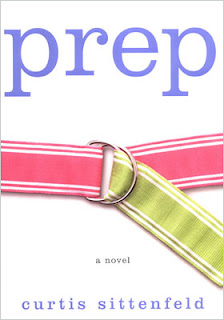 Middle-class Indianan Lee Fiora gets a scholarship to the elite college prep Ault School in Massachusetts. In her four years there she leaves behind her friends, family, Midwestern character, class, values, naiveté, isolation and virginity. Lee isn’t a traditional protagonist. You pull for her but with reservations. She is self-defeating, shallow, blasé, an indifferent student (although her academic mediocrity beats anything I accomplished in high school hands down). Why do you relentlessly follow Lee, root for her?

Her new world is one of girls with first names like Hunter and Horton, lacrosse, sailboats, vanilla milkshakes, “flattened” personalities, pearl necklaces, mothers called Tinkle and Yum, salsa that is “like, ketchup with onions in it” and students who believe they’re beyond racism. The school crest is printed on a set of highball glasses available in the school store. In short, an ultra-WASP redoubt. A school where “being rich, in the end, counted for the most.”

Soon Lee finds she neither fits into this world or her old home in South Bend, Indiana.

It is this, more than anything, that makes you sympathize with her, because it’s the essence of the human predicament to not fit into this world-and to believe (at least in adolescence) that everybody else does.

Sittenfeld keeps you absorbed. Prep is addictive. It’s fascinating to see Lee go through roommate trauma, class snobbery landmines, boyfriend disasters and the long struggle to form a self that makes some kind of sense. The writing is almost totally without pretense. It snags you and won’t give you up. You don’t want to wander away from it, or wonder why Sittenfeld does this or that. It’s honed.

It can be a good thing going through adolescence again, this time at a blessed remove. Fiction, or fiction as good as this, makes it bearable, enjoyable, something you can actually handle.