Meet the Newest Members of the Central Youth Department, Bonnie and Clyde, a Pair of Emperor Scorpions 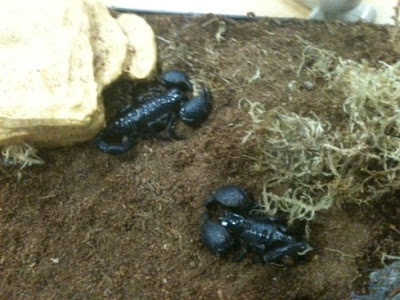 Emperor scorpions are some of the largest scorpions in the world, averaging around 7-8 inches in length. They are popular here in the United States as pets and can live to around 5 to 8 years in captivity. Emperor scorpions are a West African jungle species, as opposed to scorpions found in desert areas. In the world. Like all scorpions, the Emperor scorpion’s tail ends in a venomous stinger but the sting is no more dangerous than a bee sting. They mainly used their large pincers to capture prey and defend themselves. 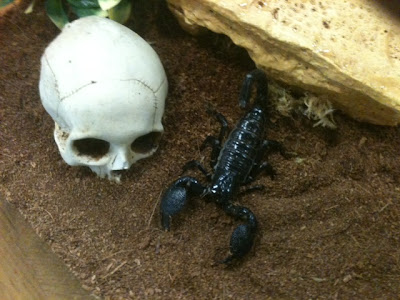 While Bonnie and Clyde are male and female, we don’t expect any offspring. When scorpions mate, they have to perform a “scorpion dance” which requires a large open space, which is not available inside their library home. In case they have offspring, which are born live and live on top of their mother, I am sure that we will be offering them to the Friends of the Library!

On the October 28th program of Mythbusters on the Discovery Channel, Kari Byron was covered in Emperor Scorpions for their Halloween special.

Many thanks to the Pet Supplies Plus for our pets and supplies!

Here are materials in the library about scorpions:
http://catalog.jclc.org/search/d?SEARCH=scorpions&sortdropdown=-&searchscope=1

For more information about Emperor Scorpions on the Internet: